In 2017 I started to get more involved in learning about the environmental movement. The public side of that work is not an easy thing for an introvert.

In March I participated in a three-day workshop about how to teach about climate change issues (for people who are not educators), led by Climate Generation at the beautiful, peaceful, sustainable Audubon Center of the North Woods near Sandstone, Minnesota. 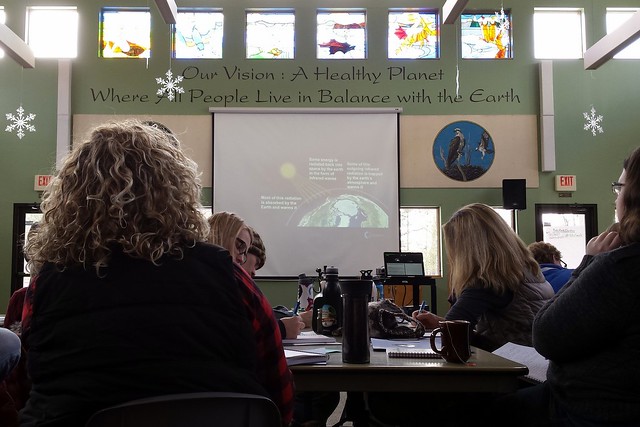 I started the session feeling out of my element, since most of the rest of the attendees work in an environment-related field. I worried I lacked credibility, but quickly learned that interest and passion are enough. 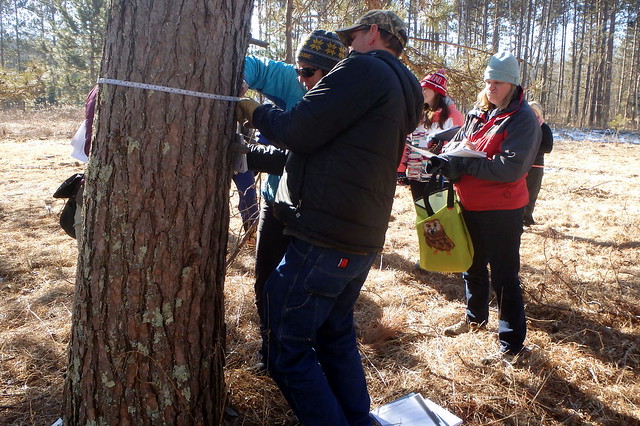 I wanted to learn about the science behind climate change, as well as to be able to discuss the facts when needed in everyday life, because at this point I am not planning to be directly involved in advocacy work. Not surprisingly, my interest comes from a love of nature, particularly wildflowers. I want to make sure nature is available for future generations. 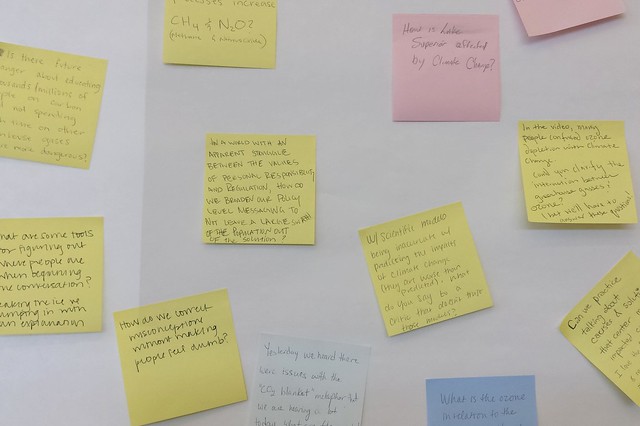 These words spoken by one of the instructors made so much sense, but I thought it was important to write them down and remember them: Being outside in nature instills a value. Do it often. Take time to be quiet and observe. People see changes when they observe multiple times.

And so did these words, written by another attendee: 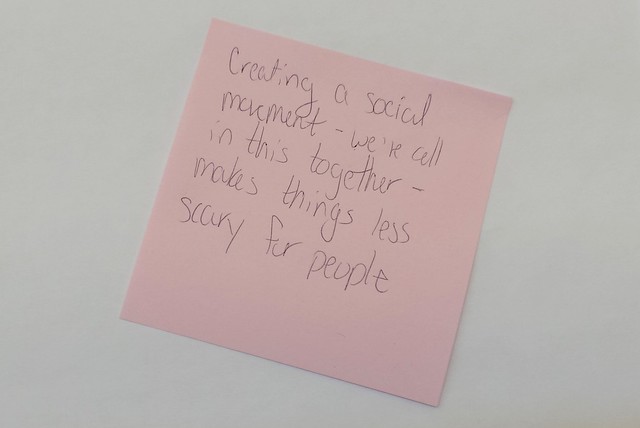 I walked to the Minnesota State Capitol over the lunch hour on April 19 to observe part of this all-day event that gives citizens the opportunity to talk to legislators about water issues. I was there only long enough to see the crowd gathering for a rally in the rotunda, but there were also trainings and scheduled meetings with state representatives. 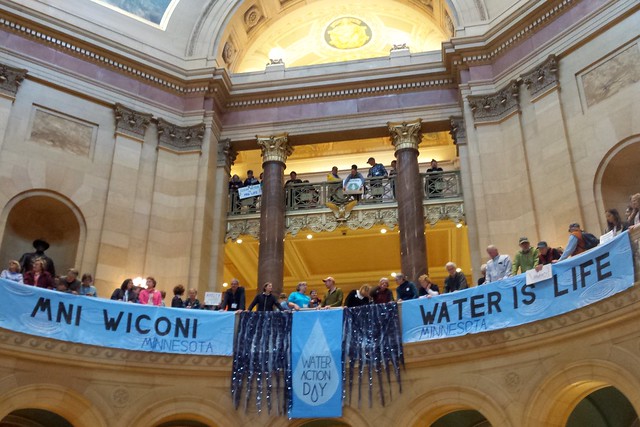 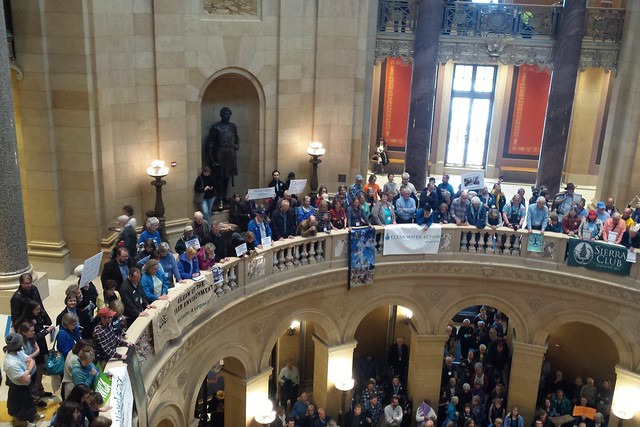 On a bright, sunny, warm May morning, I joined a huge crowd in St. Paul for a positive, uplifting show of support for the science community. I loved all the clever homemade signs. My favorite, which I saw on my way out when I didn’t have my camera ready: “March for science? Every month for science!” 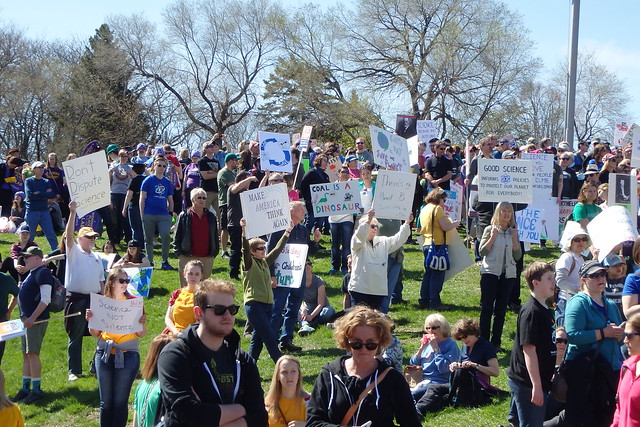 People started by gathering near the cathedral, walking around looking at each other’s signs and admiring the clever slogans or asking people to pose. 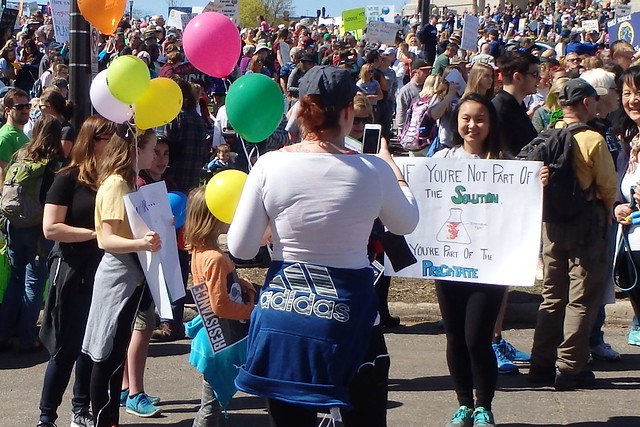 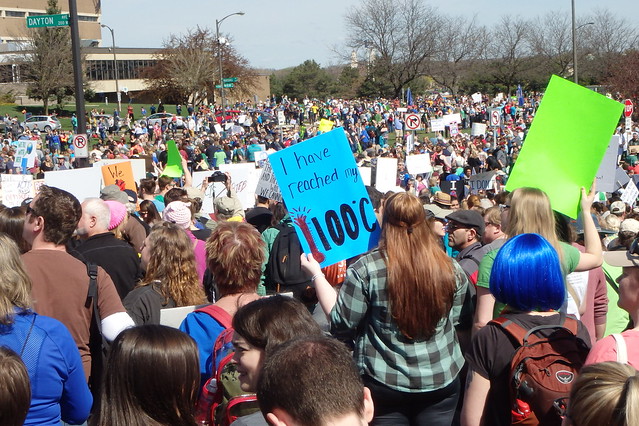 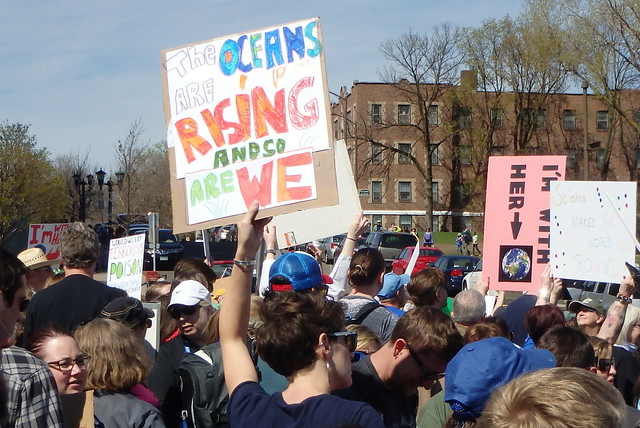 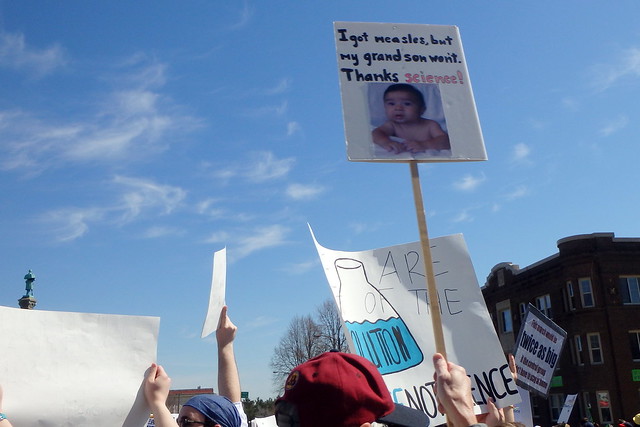 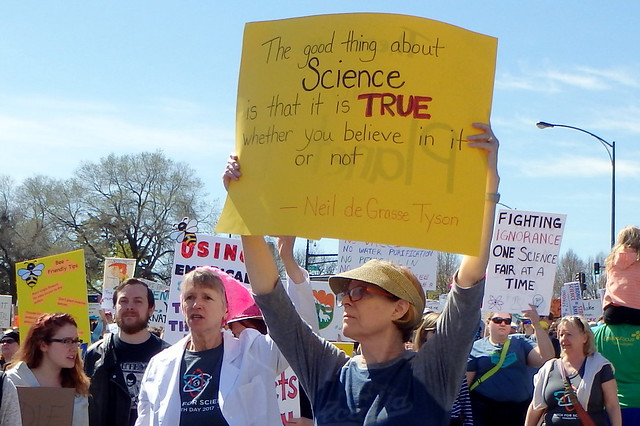 And then the crowd began moving down the hill toward the state capitol. 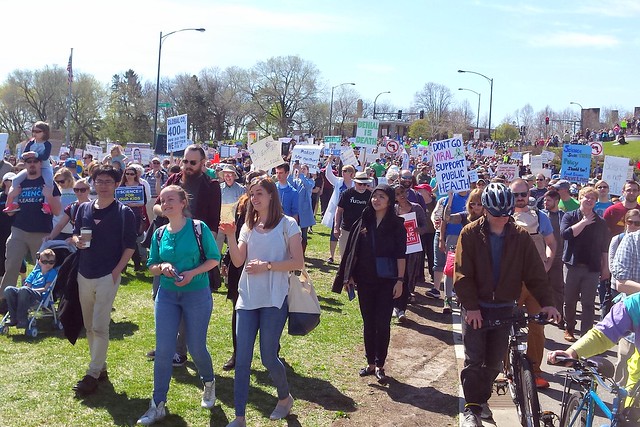 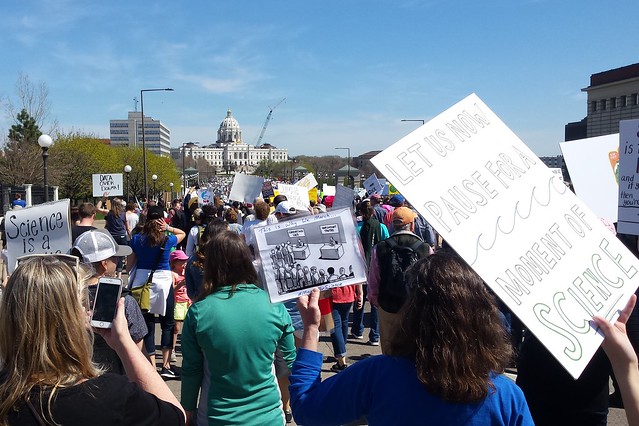 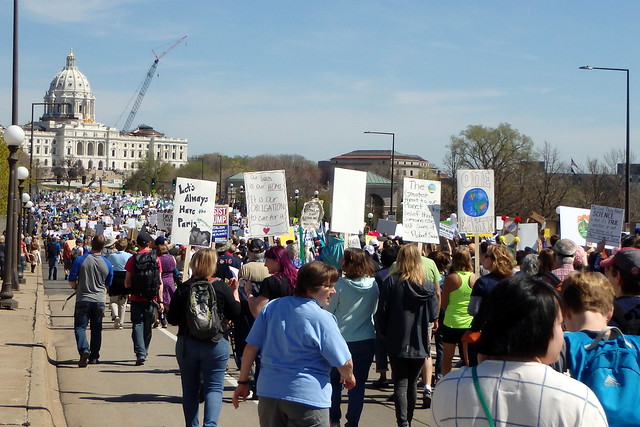 I had to leave early for a family wedding shower, so this was as far as I went along the route, and I missed the rally: 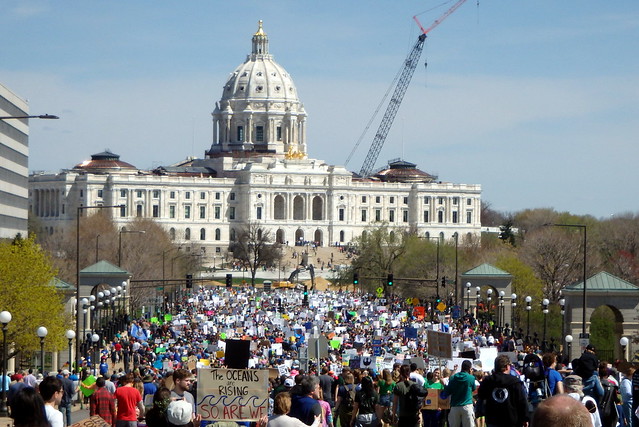 On a very cold morning in St. Paul, I learned how to identify trees that have been hit by emerald ash borer. The branches on the left side of this image have some flaked-off bark, which is a sign of EAB. Not visible in this photo, but also present, are lots of woodpecker holes from birds looking for the bugs, which is another sign. The trunk on the right side shows a section where a human manually removed the bark to show tunnels below, left by an EAB. This tree was scheduled for removal, which made it a perfect example to study. 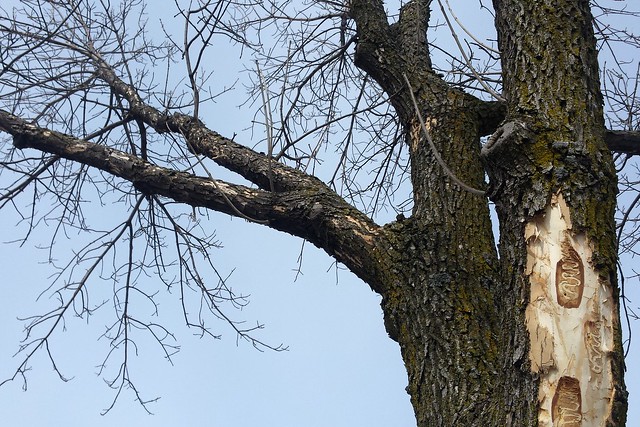 I attended part of an interesting prescribed burn workshop in February (could only stay for the first half, due to a family lutefisk event)… 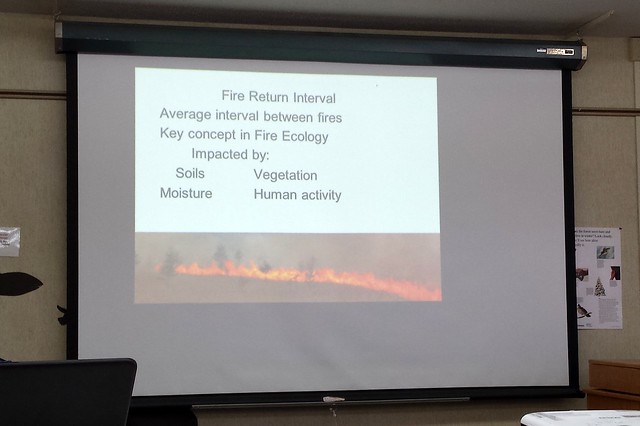 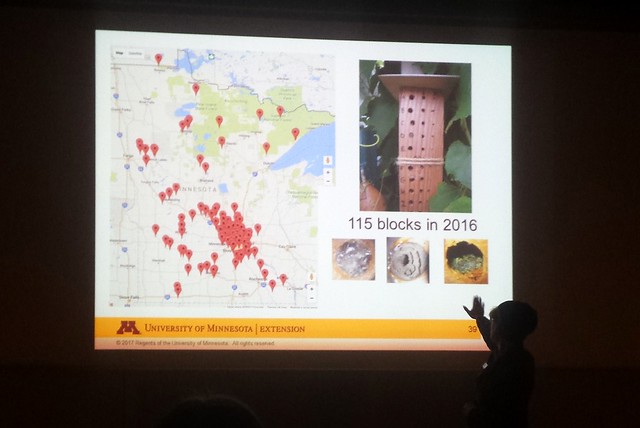 Right before the end of the year, it was time for a new car. My old car, a Honda Civic, served me extremely well for 17 years — yes, 17 — and nearly 250,000 miles. But when it had an electrical problem the week before Christmas, we knew it was finally time to make the move we’d been considering for probably two years.

I knew I wanted either a hybrid or an electric car, as an environmentalist who isn’t even close to being ready to go car-free. While I’m hoping for electric someday, I don’t feel that I am ready personally, and the local infrastructure isn’t quite ready enough, either. So, hybrid it is.

And while I was a couple years too early for a Civic hybrid when I bought my car back in 2000, I was too late in 2017 because Honda has discontinued them. But fortunately, on the very day we decided to look for a used car, we found one at a local dealership. I’m still getting used to the “newfangled” features like keyless start and bluetooth connection, but I love being able to see the miles-per-gallon updates instantly and know how much the heat or highway-vs.-street-driving is affecting that. 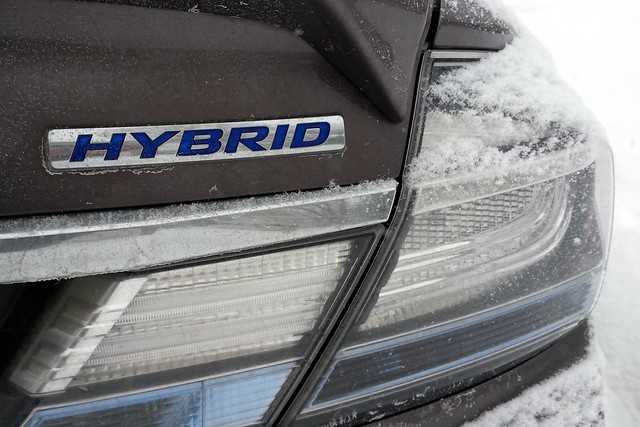 There are many plant sales around the Twin Cities each year, but for me, the plant sale is the Friends School Plant Sale. 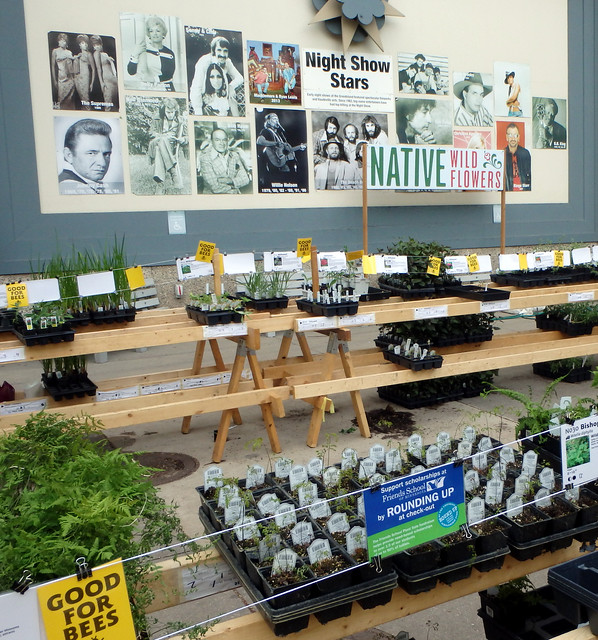 It’s held on the Friday, Saturday, and Sunday of Mother’s Day weekend every year at the Minnesota State Fairgrounds. I was introduced to the sale in 2009 by a coworker who volunteers every year, and I now know several more volunteers. In my neighborhood, several people shop at this sale every year. 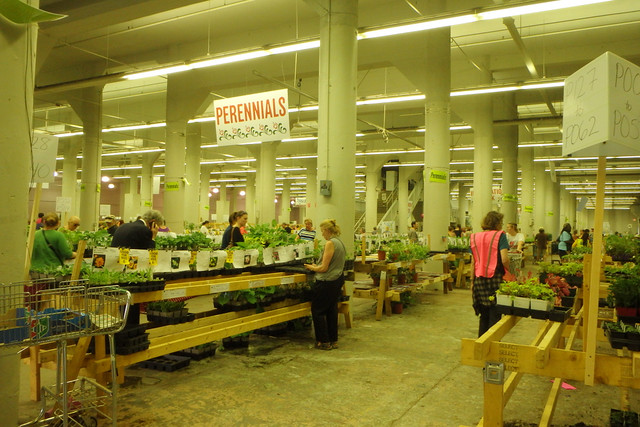 and outside the grandstand. Mornings are a very busy time, when wristbands are needed to control entry so it’s not too crowded, but afternoons and evenings have been manageable when we’ve gone. 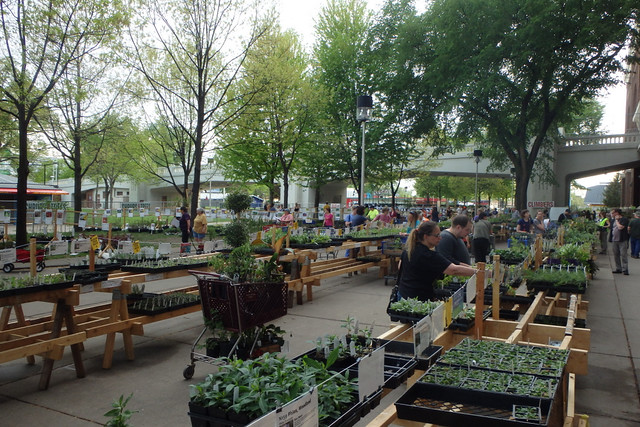 Today we headed straight for the native plants section. 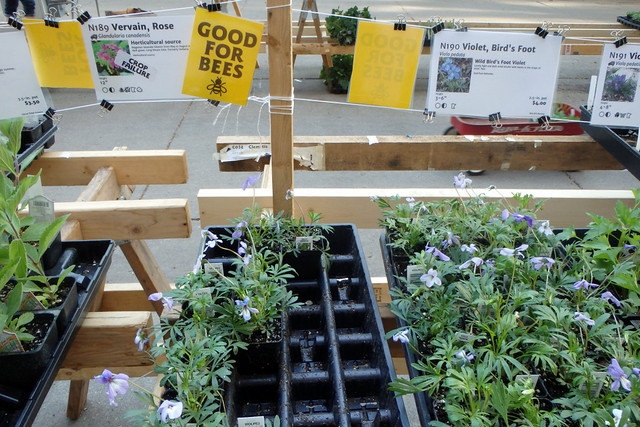 So this is what cardinal flower looks like. Definitely not what’s growing in our front yard. 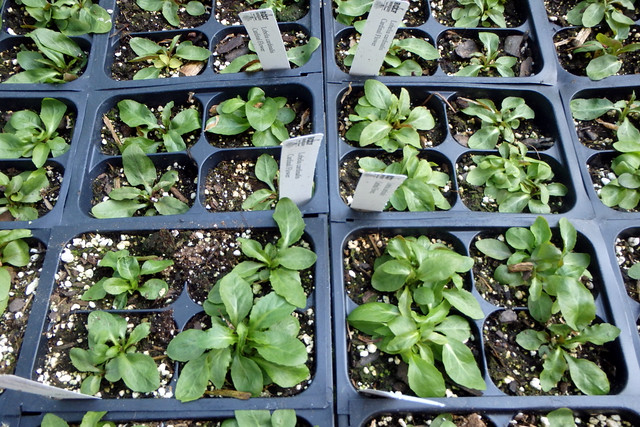 Darn, the bluebells were sold out (to be restocked on Saturday). 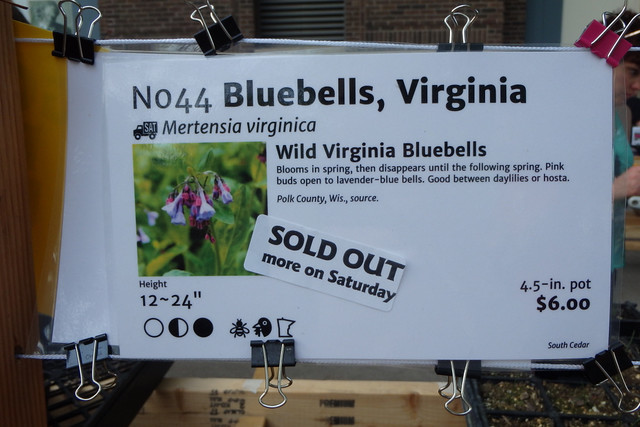 One of our choices: 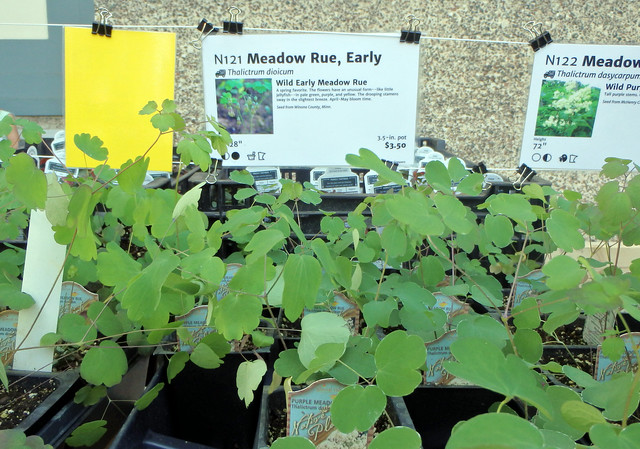 Now, how long will it take us to get these planted? 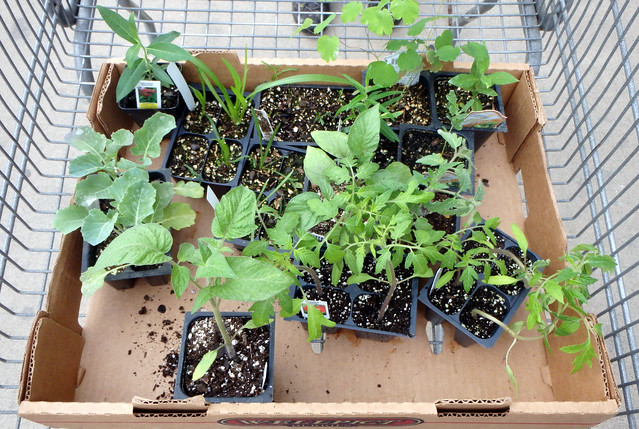 Linder’s garden center closed this fall after more than 100 years in St. Paul.

I won’t pretend that this is the only place I shop. In the Twin Cities area we’re fortunate to also have Gertens, Bachman’s, new-to-me Prairie Restorations in Princeton, the annual Friends School Plant Sale, and many more that I have yet to explore.

But this was my year-round neighborhood nursery.

We received Linder’s gift cards as wedding and Christmas presents, and spent quite a bit of our own money there too. I never could seem to remember to bring back the empty pots or the carry-out boxes.

We mostly bought perennials, trending the last year toward all natives.

Also a couple of annuals each spring.

Grapes we planted just this summer.

And tomatoes: the first year we were married, we bought two six-packs, not realizing just how many tomatoes that would produce!

Seeds to grow our own annuals and perennials.

Not to mention seed for our “birdfeeder.”

We also took advantage of their classes. A year ago we attended a fall workshop to learn how to deal with Japanese beetles, and early this spring took a “From Seed to Planting” seminar. We participants got an impromptu tour of the greenhouses to see all the newborn seedlings. By the next day, I was already looking forward to taking that tour again next spring.

Goodbye to the 53 flower marts in grocery store and mall parking lots around the Twin Cities. Goodbye to fun fundraising opportunities for nonprofits, which received 15% of the pre-tax purchase amount their supporters spent on spring flowers. Goodbye to Lil Linder’s cheerful voice on the radio commercials, and the “Get growing now with Linder’s” jingle. Goodbye to dashing in for last-minute Christmas gifts. I already miss you.