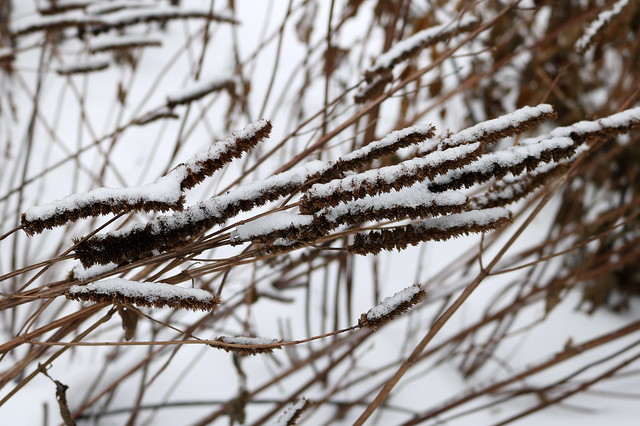 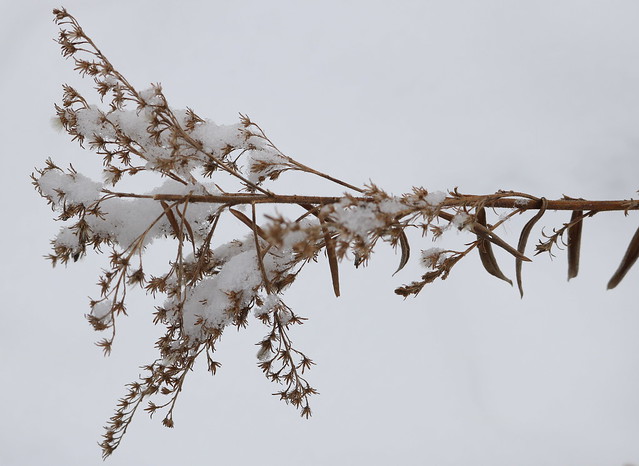 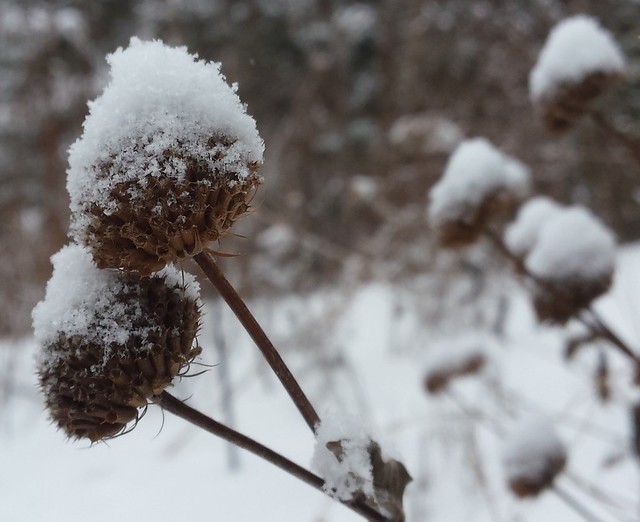 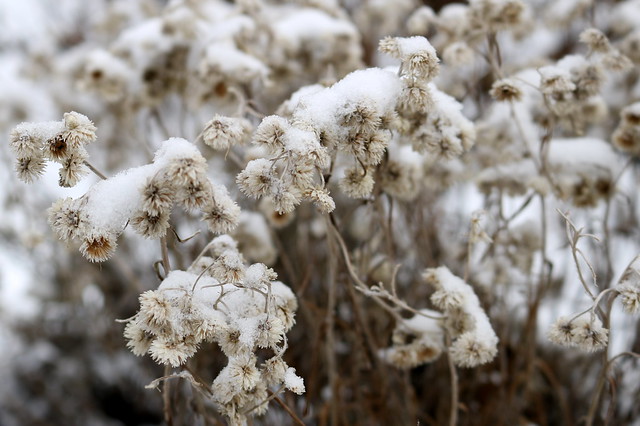 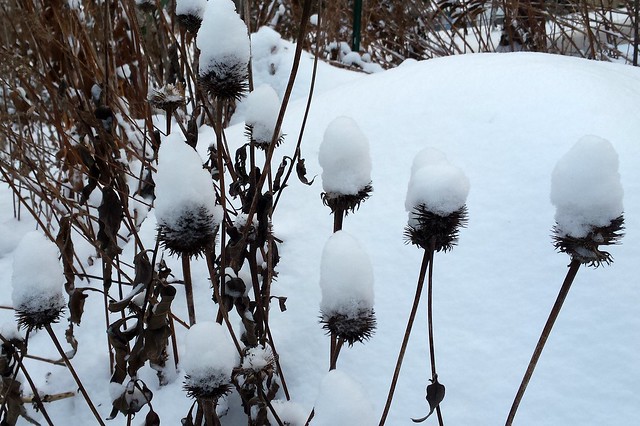 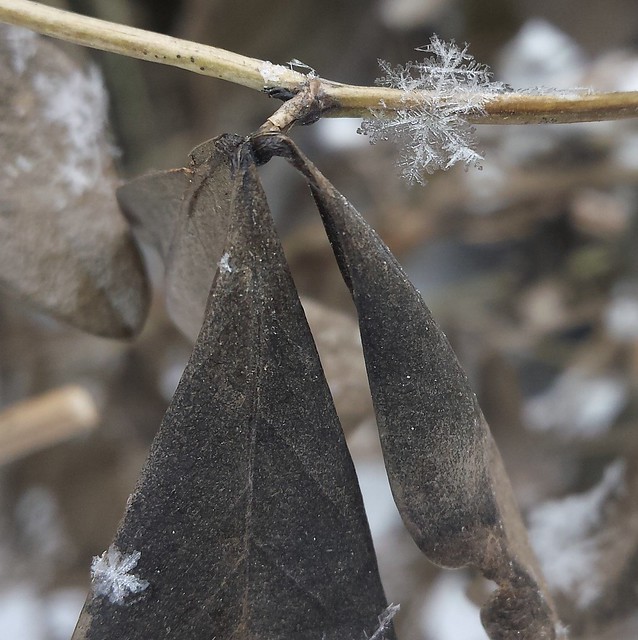 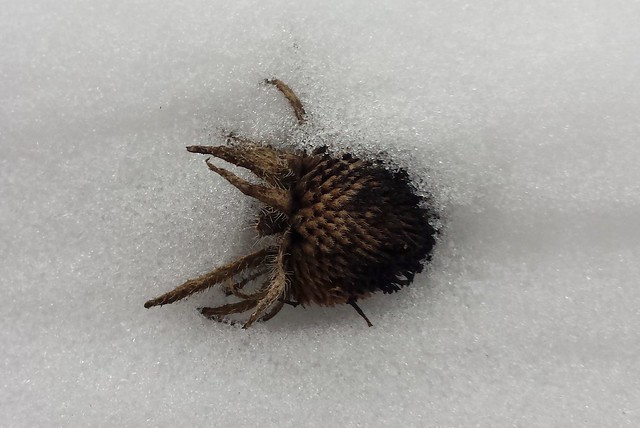 Another rudbeckia — this one held onto its color: 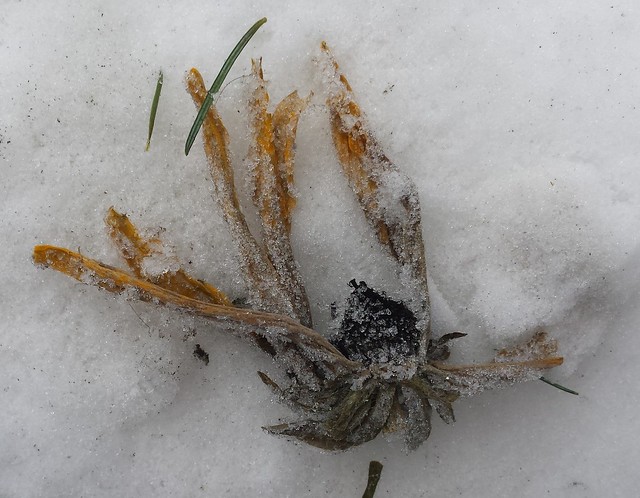 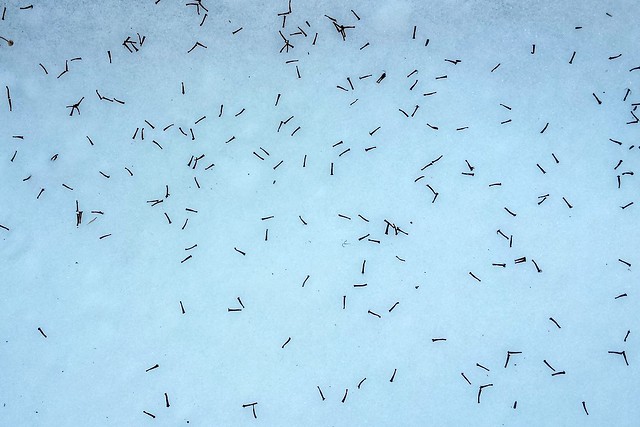 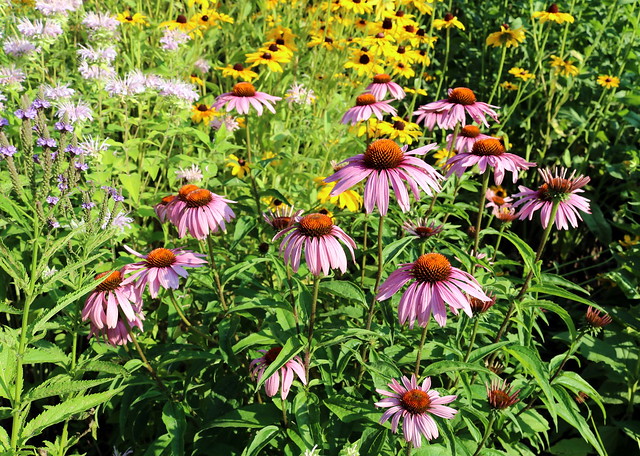 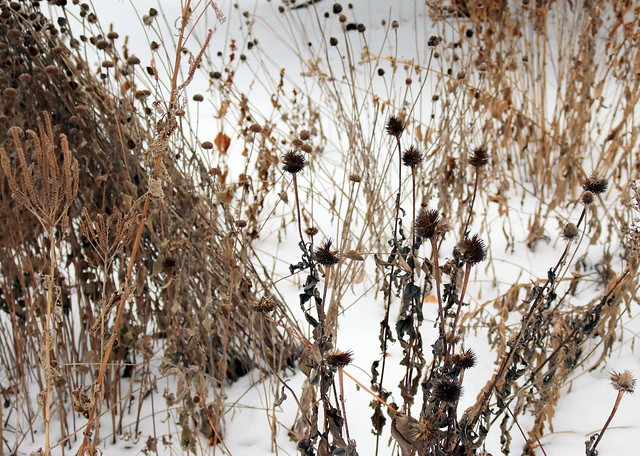 This is what the yard should look like right now: seedheads sticking out of the snow. 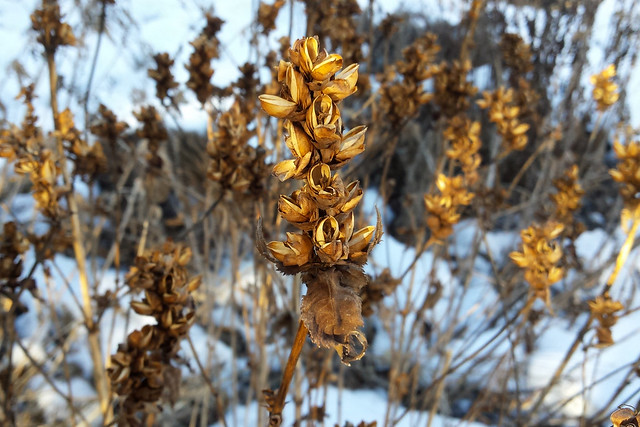 And this is what it looked like earlier this month. 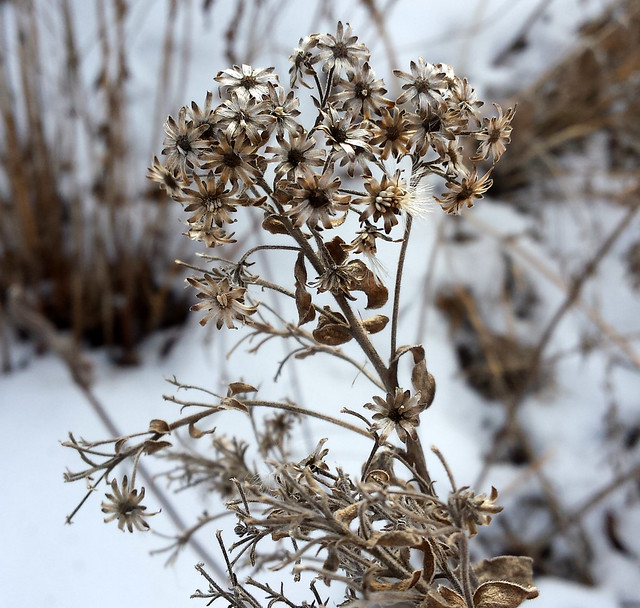 Two years ago today, I was talking about below-zero temperatures: “It’s the time of the year when it feels like winter will never end, when even though we’ve had less snow than normal, it’s been bitterly cold for weeks.”

This year, though, it seems like we barely even had a winter. In the middle of February were 14 straight days of temperatures above freezing. It started with five straight days above 40, which was weird enough. The temperature dropped a bit for one day before climbing back up to 42 and then shooting up to 63. That was the start of six straight days above 55, with five daily records set. On five of those nights, the low didn’t get below freezing.

In February. In the Twin Cities of Minnesota. Not surprisingly, the little snow we had disappeared. The ground got squishy, and then the perennials started appearing. It’s usually such an exciting sight when the first shoots are spotted – but I cannot muster the energy to be anything but concerned in February.

Lilacs and tulips are bad enough. But then the turtleheads started emerging, too. Turtleheads! They’re far from flowering, but we still should not be seeing any plant growth this early. This one gets a fair amount of sunlight, especially in late afternoon. 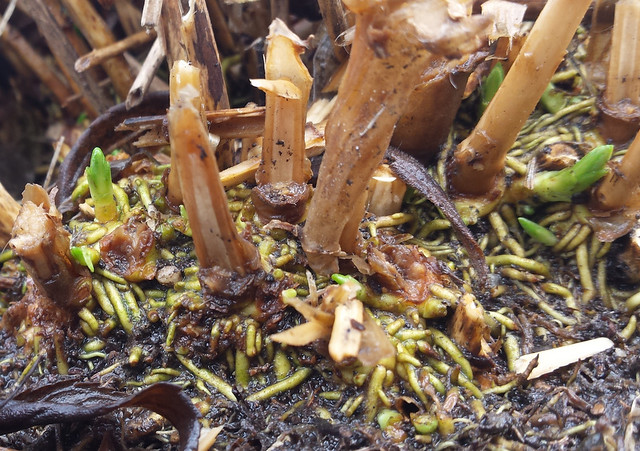 This one, however, is in full shade during the winter. 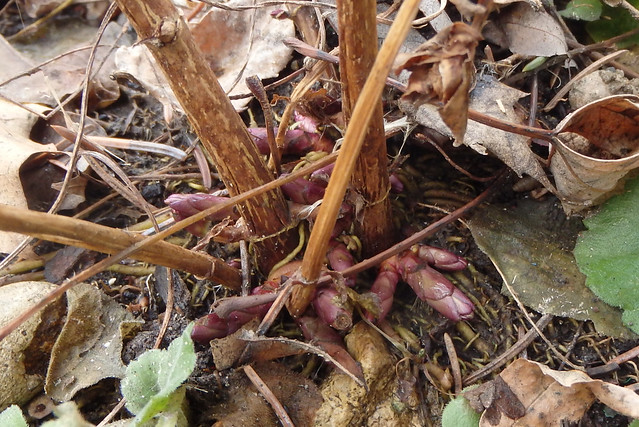 (To be fair, another one that’s in between the two locations is still in ice.) 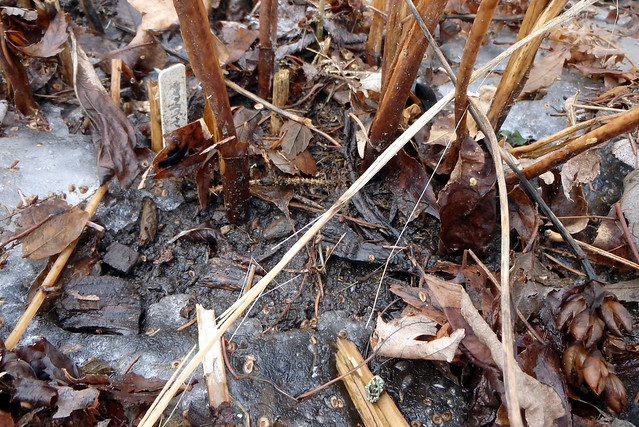 But the sedum has really popped. 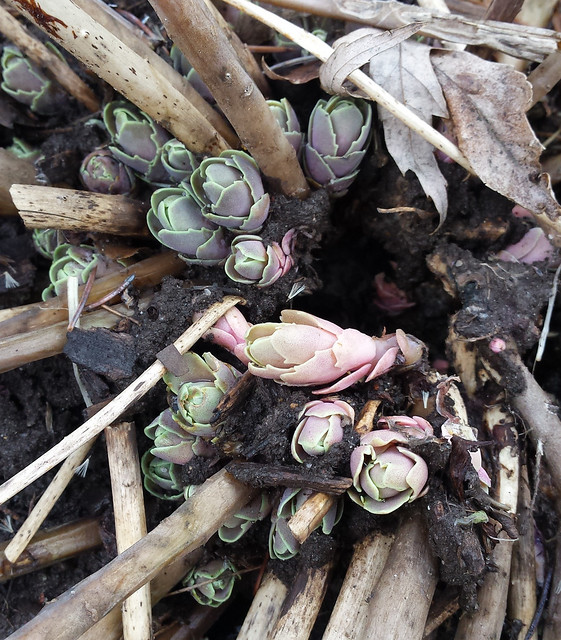 (Three years ago, it was late April when the sedums and turtleheads looked like this.)

And the cup plant has lots of little purple shoots. 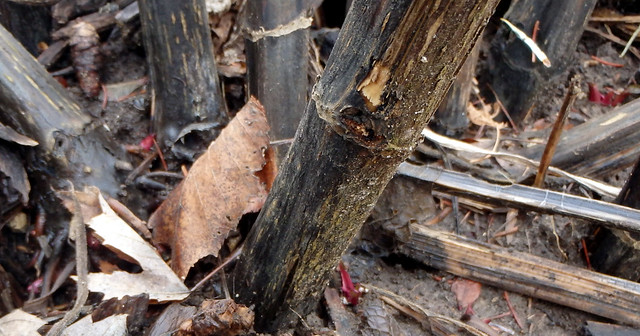 To end the month we were back down into the 30s and 40s, and teens and 20s at night, still warm but closer to normal for this time of year. The ground firmed up again. I had to wonder if the trees – which had begun to bud – were confused about what just happened. 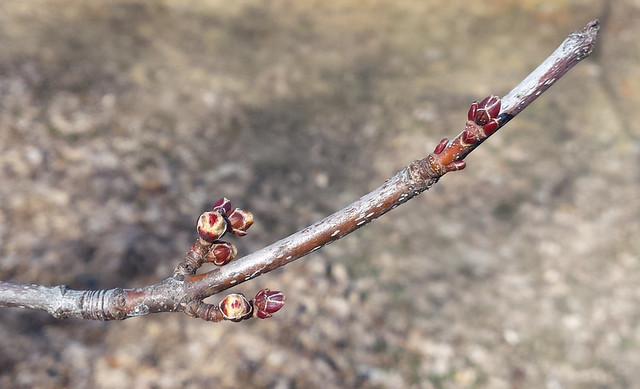 Final data is not in yet, since the month hasn’t officially ended, but as of Feb. 27, the average daily high temperature was 39.9 degrees, more than 10 degrees warmer than normal.

This is not normal. This is what the garden looks like now, without snow – more like November than February. 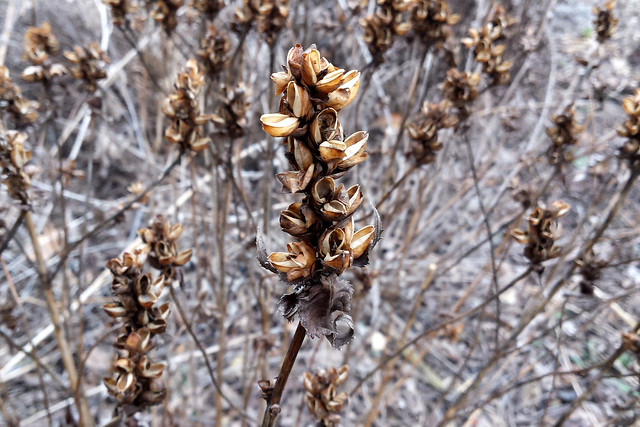 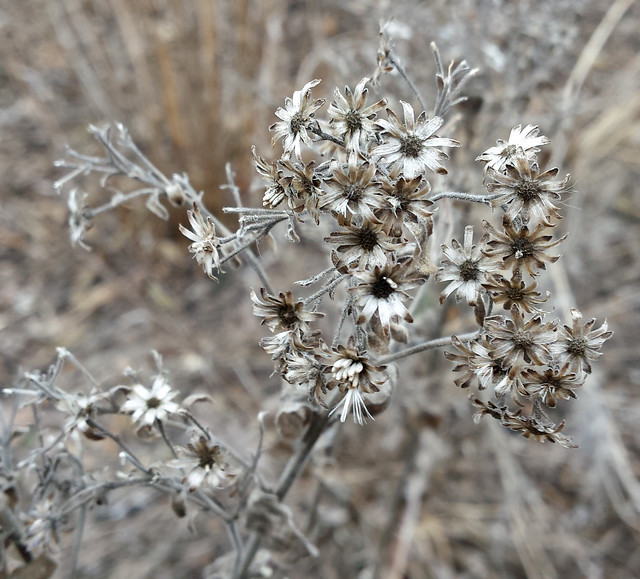 It seems strange to talk about snow after days and days of 50- and 60-degree temperatures and rain have left us with virtually none. This observation happened just over a week ago.

Near the compost pile I noticed a bright blue spot 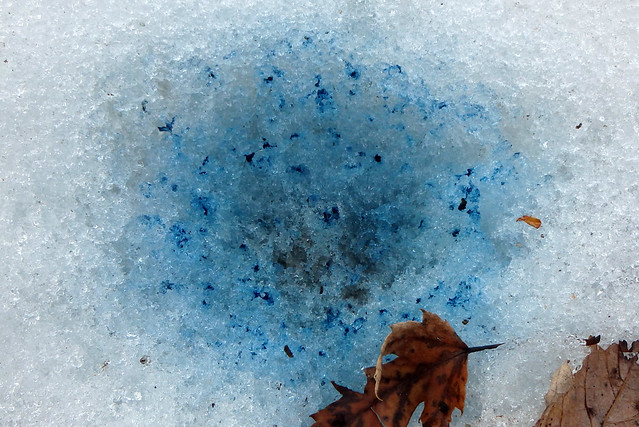 and then another that I had walked right by without noticing. 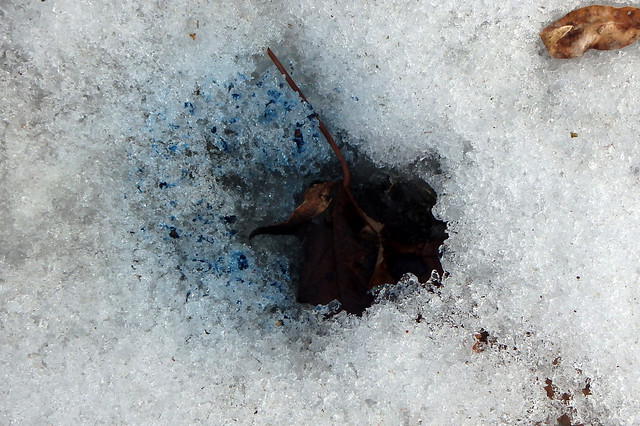 I had heard of this phenomenon before: animals eat some kind of plant, which turns their urine blue. I thought I had heard it was caused by deer or rabbits, and either could be the culprit in our yard. So I started looking around, and then I started noticing lots of round scat, which means rabbits. (Deer scat is more oval.) 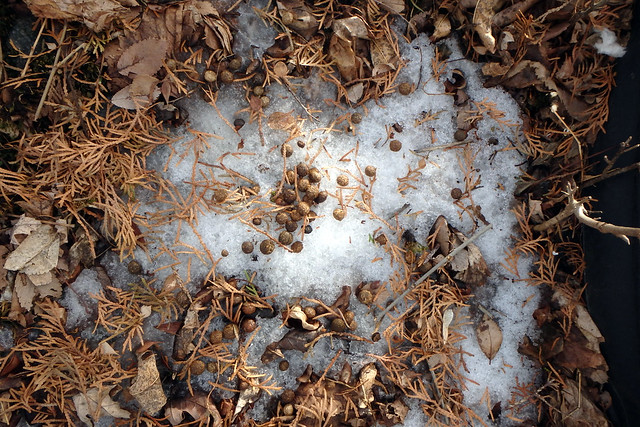 The plant: was it buckthorn? Hmm, didn’t we just realize we have a patch of buckthorn in the yard? 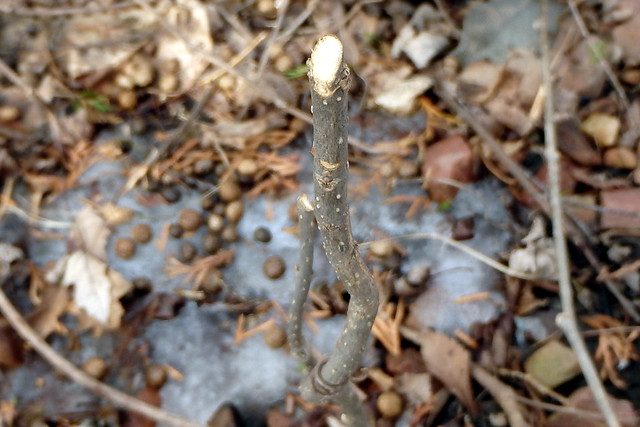 Yep, the stems of these small trees (which I suspect are buckthorn, given their appearance and location close to confirmed buckthorn) seem to have been snacked. An Instagram friend told me last year that rabbits chew the stems of plants cleanly at a 45-degree angle, like the photo above, while deer cuts are more crushed or ragged. Rabbits are also known to remove the bark all the way around a tree, potentially like the messy work below – though so are deer. This damage’s cause is less clear to me. 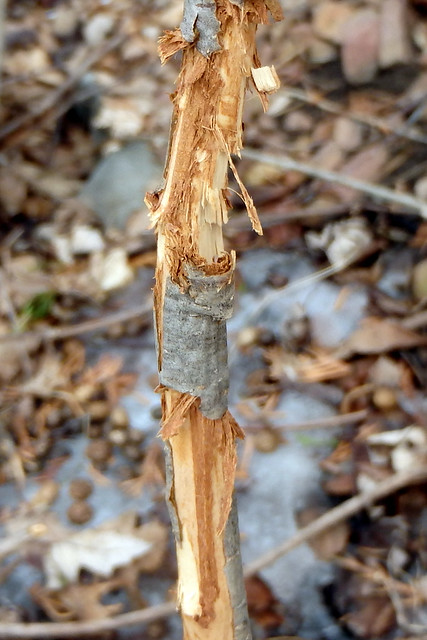 Several unofficial sources agree that both rabbits and deer are the animals in the equation, and the chemical is almost always from buckthorn (though apparently salts could be another culprit). Interestingly enough, it’s the bark of buckthorn, and not the berries, that causes this phenomenon.

And a closer look at the first spot showed some rabbit scat right next to the blue. 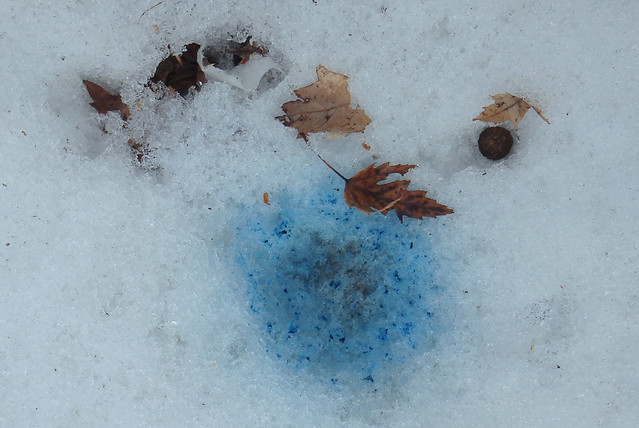 If only the rabbits could eat enough of the buckthorn to kill it. 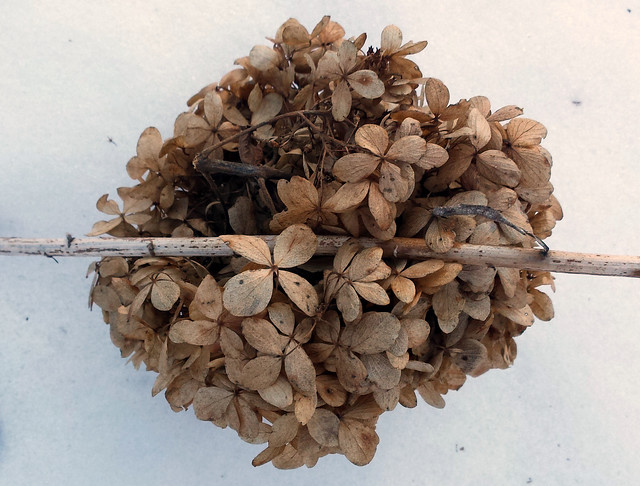 Snagged on a goldenrod stem while tumbleweeding through the neighborhood.