In early spring we decided to convert more of our yard from lawn to garden. We marked off a giant rectangle in the backyard and I immediately thought, swimming pool! But instead we stuck with the plan and started removing the sod for a garden. The robins were very excited about the freshly uncovered worms. 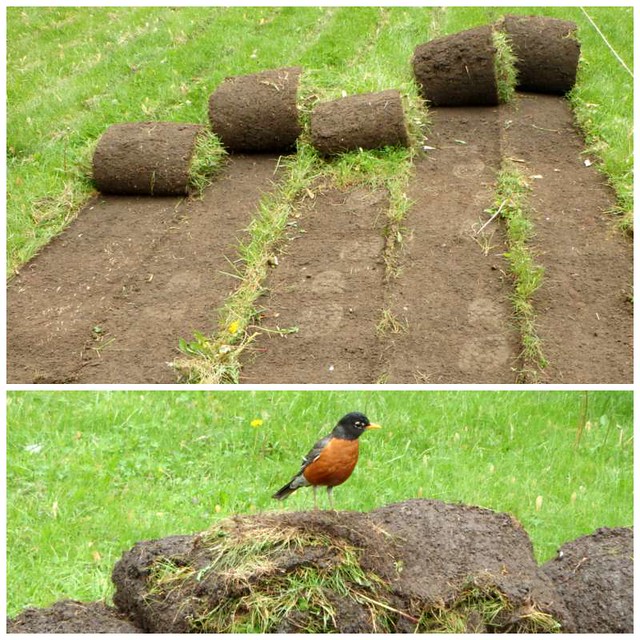 We planted some of the vegetables from seed, and added some fruit and veggie plants: 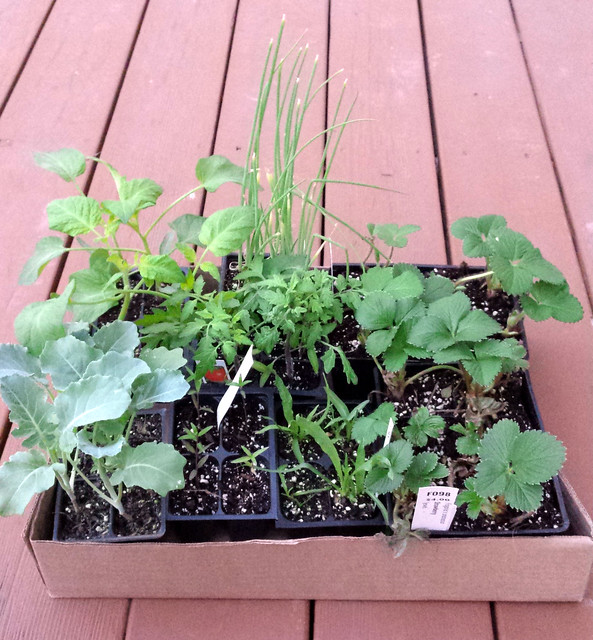 The raspberry half of the new garden was covered with wood mulch, and the vegetable half was covered in leaf mulch (not pretty, but effective). Here’s how our plants did:

One of our distant neighbors has a thick row of lettuce at the edge of his prolific vegetable garden. I thought we should imitate that because it may be an effective barrier for rabbits. So we had lots of lettuce – even though we quickly decided to put up a fence anyway – enough that we couldn’t come close to keeping up with it, and it went to seed. Interesting flower variety: 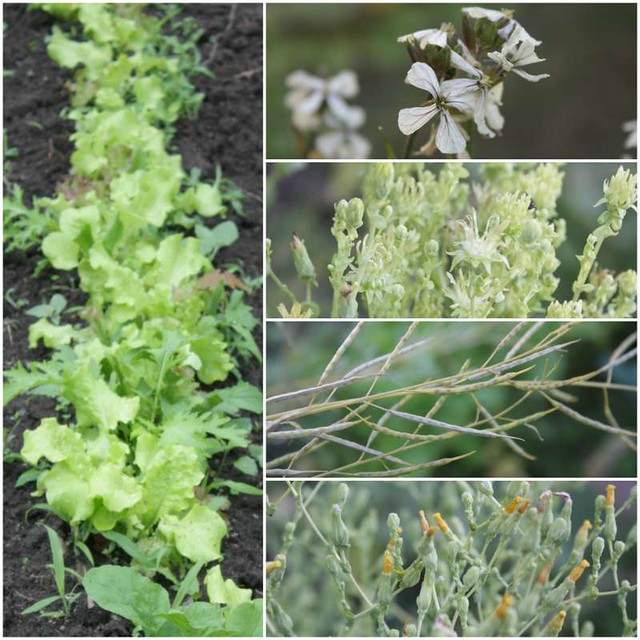 We started with four tomato plants, and then took in about a dozen more that were going to be composted. They did well at first, but suddenly half were eaten by squirrels, and half rotted on the vine, perhaps because of all of the rain. But there seems to be a resurgence lately, and I may try fried green tomatoes this week. 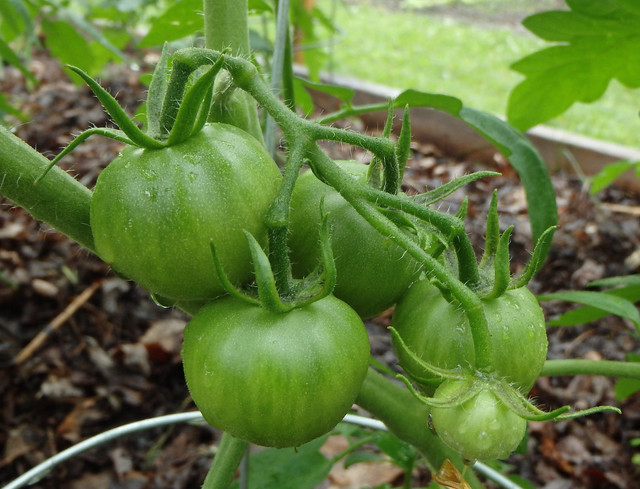 Of course we had BLTs with homegrown L and T. 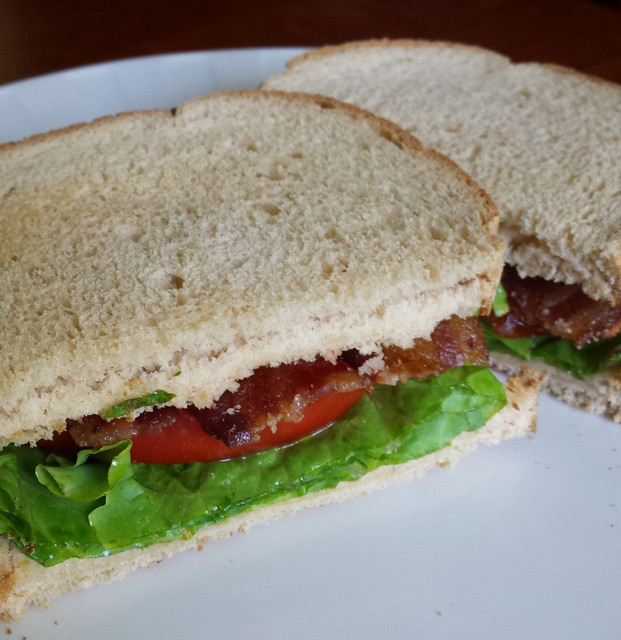 We planted some squashes and gourds from seed, and we also purchased some plants. Neither did very well, though it looks like all of the plants were attacked by squash borer, and some became a home for slugs. 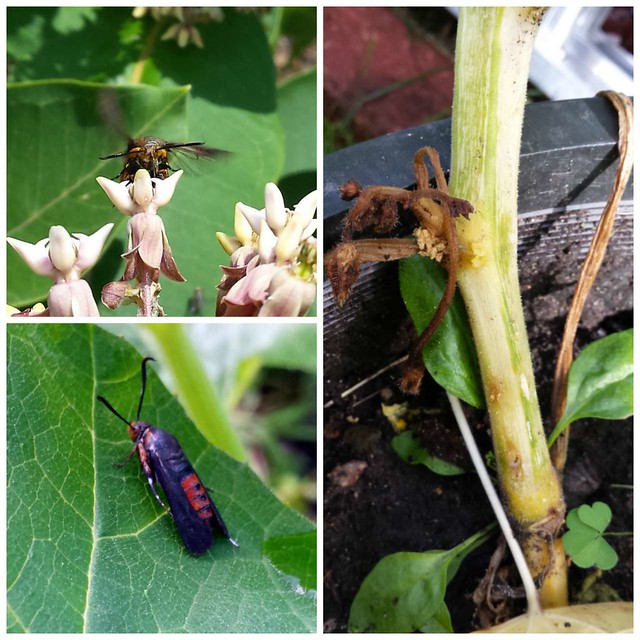 One vine has looked pretty good in spite of the bugs, but it has produced only one fruit (I think it’s a spaghetti squash). 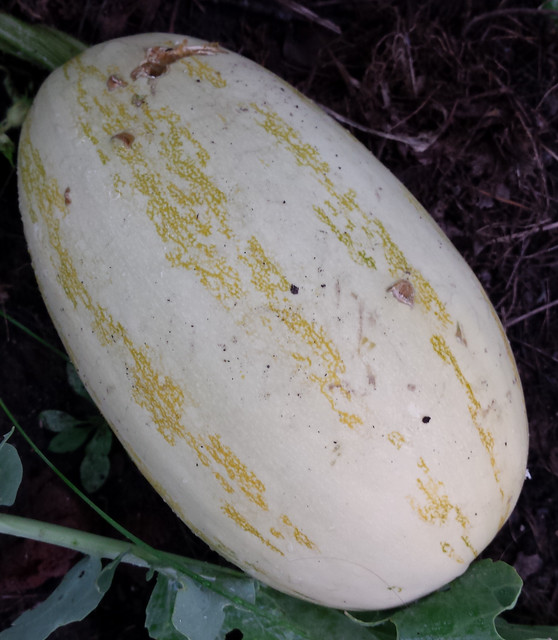 A yellow squash grew but was quickly discovered by squirrels. A second one is now growing but will likely be destroyed soon, too. Even the plants that weren’t attacked by squirrels or bugs ended up covered with powdery mildew. 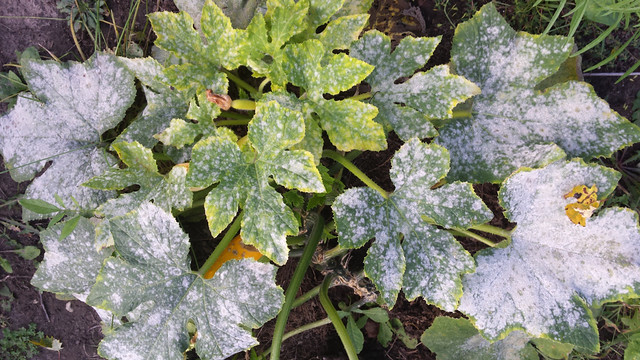 Our pumpkin vine has lately been growing long and flowering a lot, but it’s unfortunately going to be too little, too late.

We have one more opportunity with some late-growing acorn squash, and we relocated it to the smaller covered garden to protect it from any more squirrel interference. 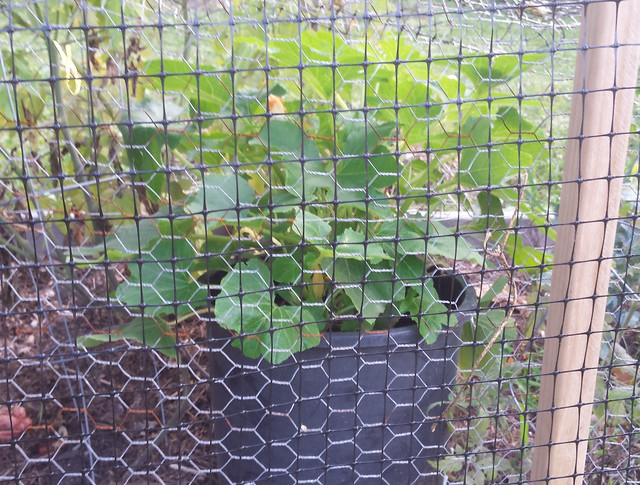 Broccoli flowered before it reached a size I would have considered harvesting. Peas did okay, but we didn’t get a lot, and I didn’t know when to pick them. Next year I will know better. We’re probably done attempting to grow corn, though. This was the second year we tried, and what the squirrels didn’t chop down, the wind knocked over. 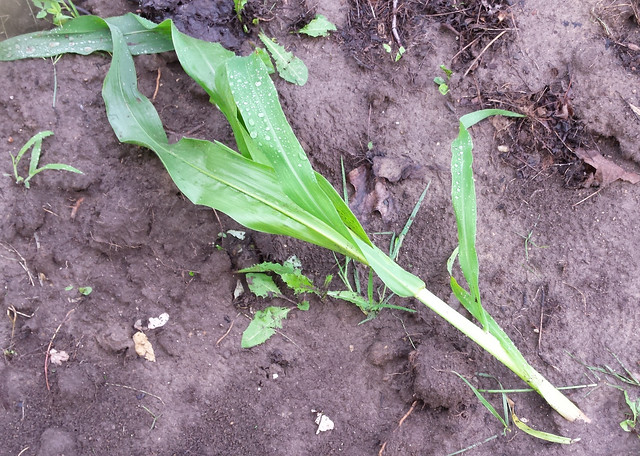 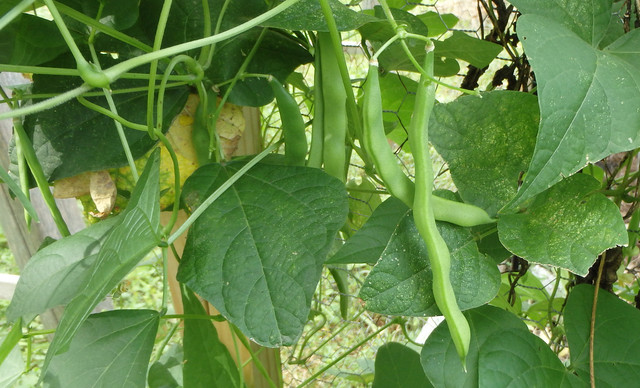 Our four eggplants flowered but didn’t produce any fruit. 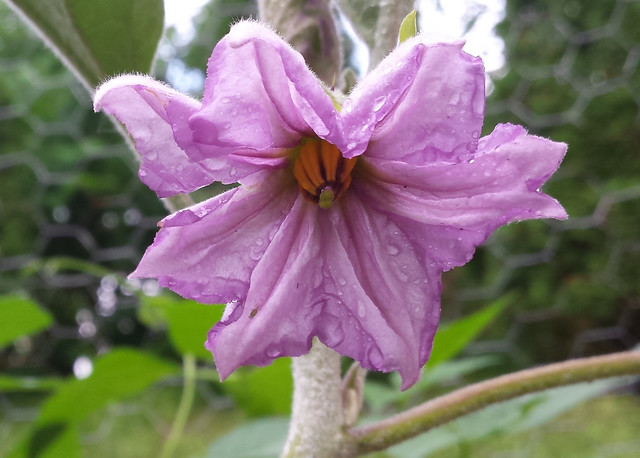 Our neighbor generously gave us two dozen extra kohlrabi plants. They were a big success, and they’re actually kind of tasty. We’ve tried them steamed and roasted. 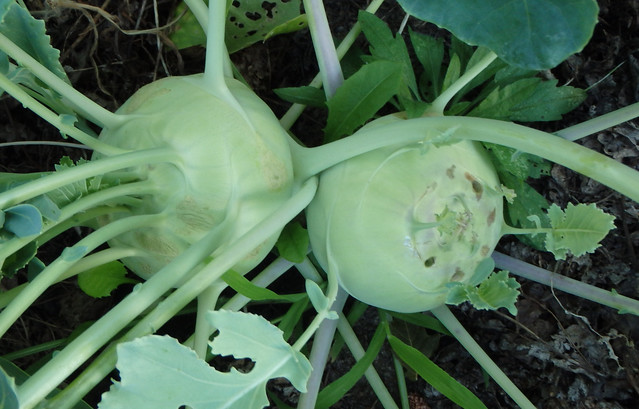 Potatoes: two plants popped up in the compost pile, then we transplanted them to the main garden. We also purchased yukon gold and a purple variety of seed potatoes. They had pretty white flowers that even turned into tomato-like fruit, apparently because of wet weather. 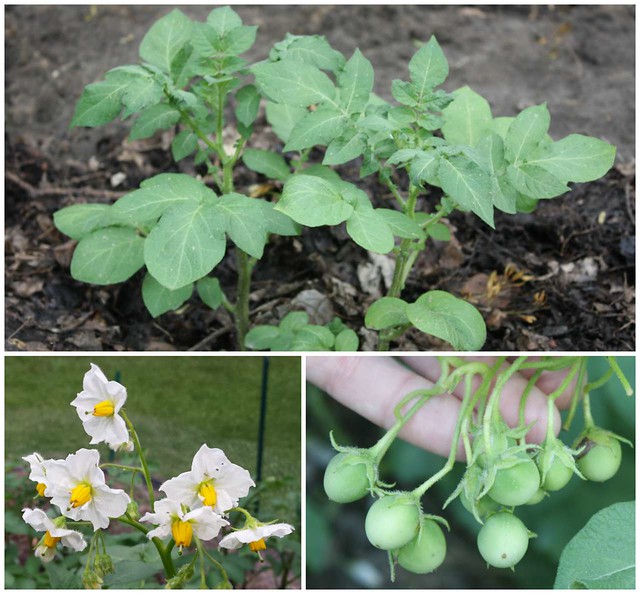 All of the plants are doing well and the ones we’ve dug up so far have produced 3-5 potatoes apiece, though some have had strange holes. I was entertained that the purple-skinned potatoes also have purple flesh.

We planted a lot of kale this year and that tasted okay, but one plant overwintered really well. This was the one I turned to weekly for kale chips, and it kept regrowing all season. 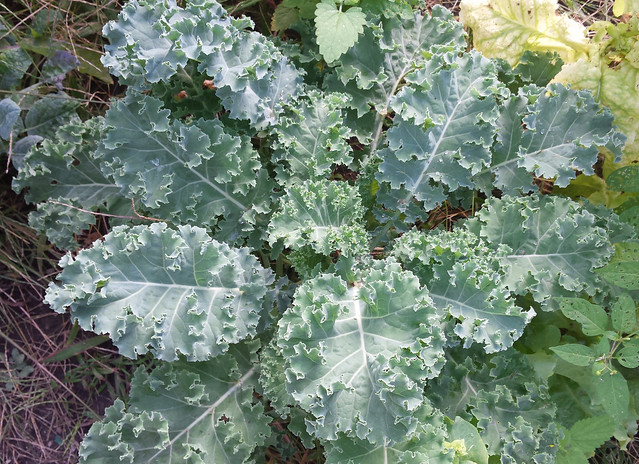 This was the year to finally do something about our underperforming raspberry bushes. We originally planted them in a shady spot of the backyard about three years ago, and they’ve never amounted to much. This year we decided that they deserved more sun, and we moved them to the west side of the new garden.

About half of them started producing flowers and then berries. 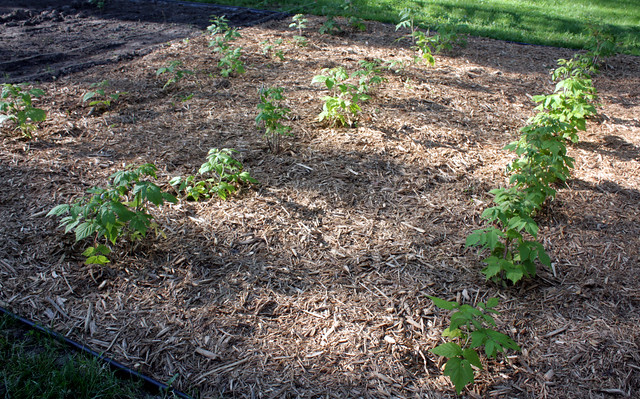 Our squirrels can’t leave them alone, though, so we haven’t yet been able to enjoy the newly productive bushes. (I’m dreaming of a giant squirrel-proof greenhouse for next year.) 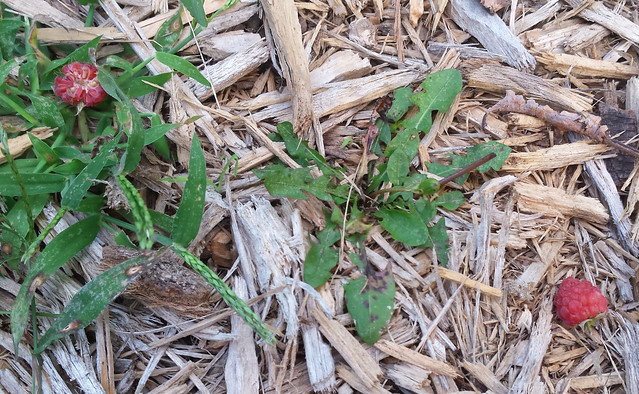 Another potential for next year: strawberries. We bought several plants, but almost immediately, rabbits ate several of them. They still produced a few berries, and the rest of the year they grew well and even sent out runners. We have high hopes for next year – assuming we can protect them well enough from the winter. 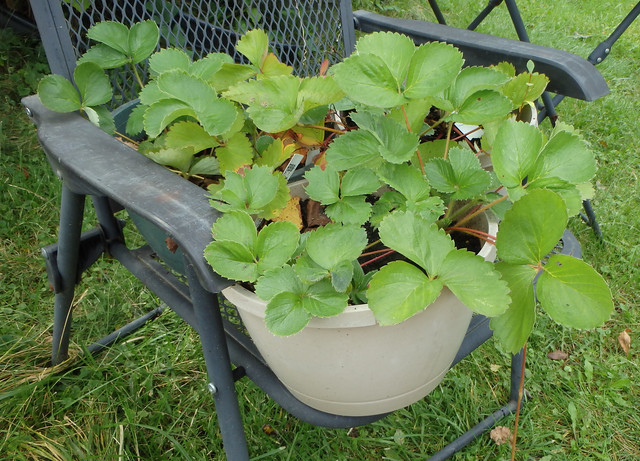