This was our first year of raising monarchs. Most of the time, when a butterfly emerged from its chrysalis, the big event happened before I woke up. So when it was time for the 12th birth, the day after Labor Day, I didn’t even try to wake up early to catch it. But when I checked on her, I noticed a that not only had she emerged, there was major problem: she was stuck in the chrysalis. 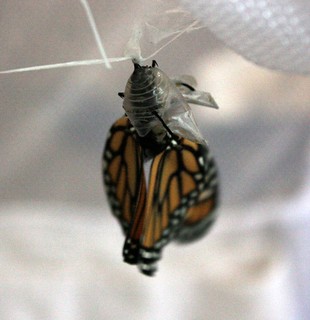 Her head and wings were out, but her abdomen was stuck to the very top of the chrysalis. It was obvious that she had been struggling to free herself for some time.

Best practices say that you should not help a monarch who is stuck. If this problem occurs, it is because something is wrong and the monarch isn’t healthy enough to live. But how in the world could I not help?! It was terrible to watch her frantic struggling. And I’m already helping by raising monarchs indoors, away from predators. Of course I felt like I had to help her.

Luckily, my husband was at home that morning to assist. I cut down the chrysalis, and we gently laid her on a towel. It didn’t take much to pull the chrysalis off. 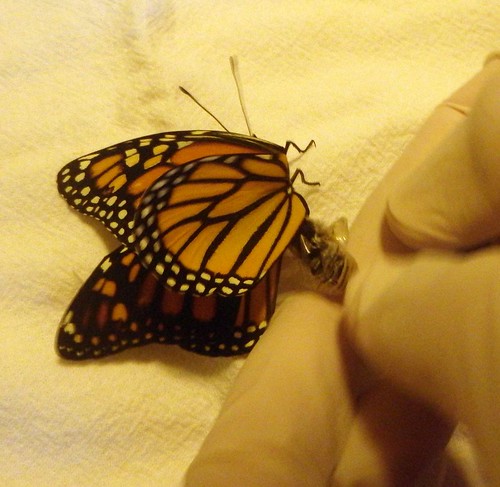 Her wings were limp, which I thought meant she might be new enough that she still had time to finish drying. I struggled to get her back into the cage because she was desperate to climb up my hands rather than be set down. She knew she needed to be able to hang to let her wings dry. 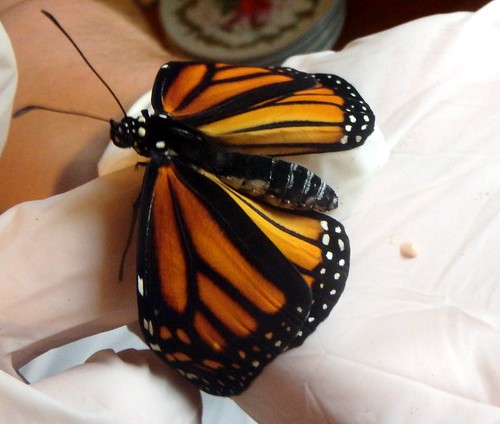 Unfortunately, when I got home from work that night, her wings still weren’t straight. I thought she flew a tiny bit but then realized it was more of a jump with a flutter. I had already decided to keep her inside overnight, and in the morning, not much had changed.

So what to do? It was the migration season, and she couldn’t fly. She needed to get to Mexico, or she would freeze or be eaten. Would it be more humane to euthanize her? Or should I keep her inside as long as she could survive?

There’s not a lot of advice for a situation like this. The only thing I could find was along these lines: “If the butterfly can’t fly, you should feed the butterfly sugar-water or rotten fruit.” Well, of course we should feed her. But then what? Do we keep her for the nine months that the migration generation lives? And even then, if she can’t fly, we wouldn’t be able to let her out even when the others returned to Minnesota in the spring. This was pretty stressful.

I mashed up an old banana and somehow managed to set her down near – or more accurately, in – it. By the time I had a chance to wonder whether she’d know what to do, I noticed her proboscis was already in the banana.

Later she was standing on top of a slice of plum, so I was assured she could move around on her own (even with fruit-covered feet). But it was obvious that her wings weren’t correct. 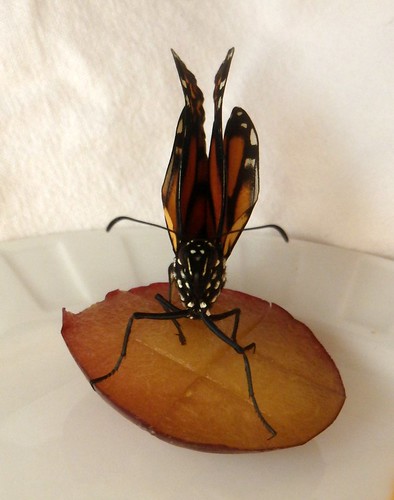 With the lack of a better option, we kept feeding her as the days passed. When I had first told people weeks earlier that I was raising monarchs, several people asked me if I planned to keep them. I thought they were crazy. The whole point is to raise healthy butterflies so they can be released. And now we were keeping one as a pet.

I took her outside when I released a healthy monarch. She seemed to enjoy sitting in the sun and made a couple attempts at flying.

Five days after she emerged, she was very active. For an entire hour, she sat near the mashed bananas: drink, drink, drink, rest. Repeat. It even seemed like she was doing exercises, waving her wings and lifting her abdomen. And then she was trying very hard to fly. It didn’t work so well when she was on a flat surface, but if I picked her up, she could jump and fly away – except I eventually realized that she wasn’t so much flying as she was gliding; her path was always gently to the floor. 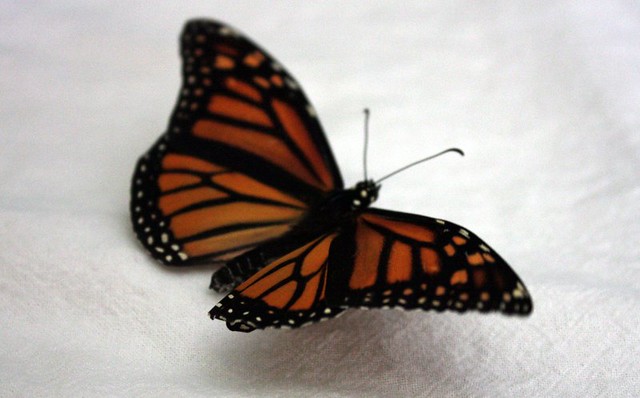 The following night she was even more spunky. She wouldn’t sit still anymore, walking all over the table and gliding over to the window and climbing the curtains. 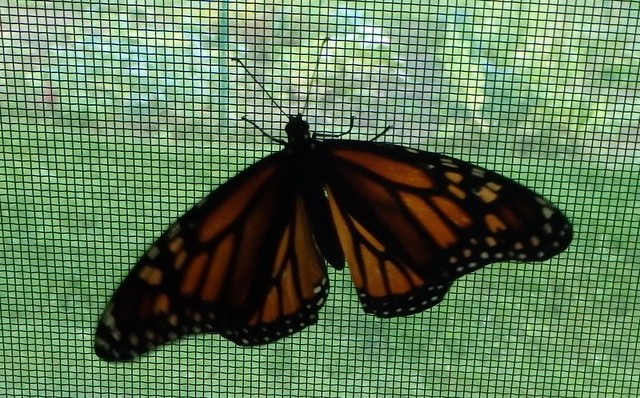 Many times I picked her up and she jumped off my finger. She seemed determined to fly, and she seemed mad that it wasn’t working. 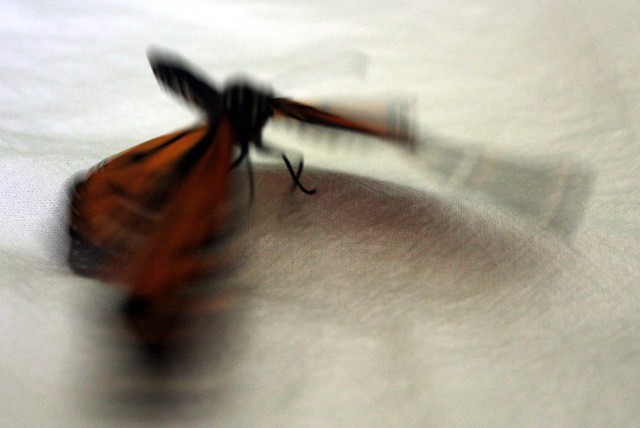 It seemed that she got discouraged after this. The next night, she would barely eat and only briefly tried to fly.

The next morning she was listless on the floor of the cage, one of her legs already folded up. It was time to help her go. Fortunately Bill was home to help me. We put a tissue in a jar to give her a soft spot to rest, and then placed a cotton ball soaked in nail-polish remover in the jar and sealed the cover. Almost immediately, she was gone.

I never intended to have a butterfly as a pet, but this one stole our hearts. I’m sad that something was wrong to prevent her from flying, and that we couldn’t fix her. Though if we hadn’t helped her out of the chrysalis, she would have died anyway. We did the best we could to help her. 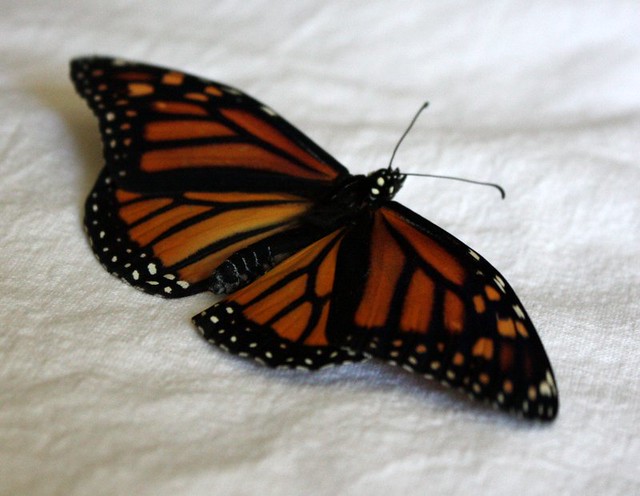 So what went wrong? Everything seemed normal when she was a caterpillar. The one thing I noticed was that it seemed to take her a really long time to get into the J position: she was at the top of the cage for a whole day before making the silk pad and falling back into the J. 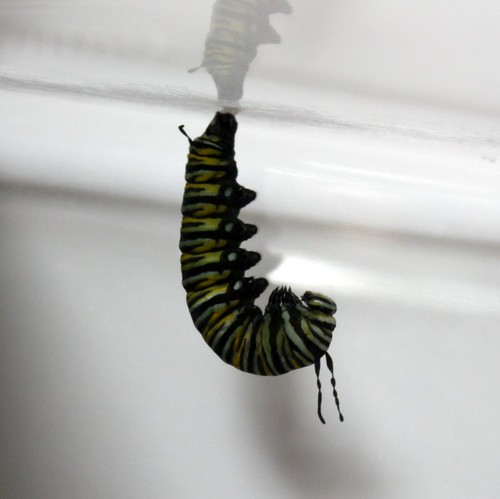 But I watched her transform, and that process seemed fine. 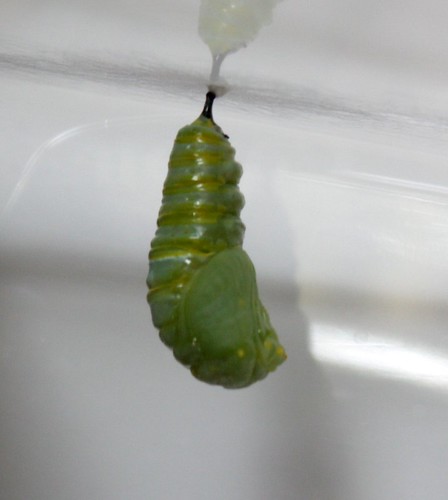 She’s the chrysalis in this photo: 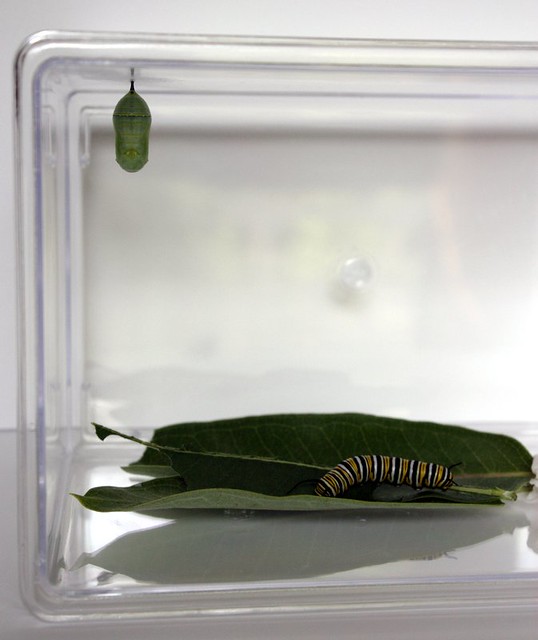 But of course, she ended up stuck in the chrysalis. Also, her abdomen had irregular white marks instead of the usual defined lines. 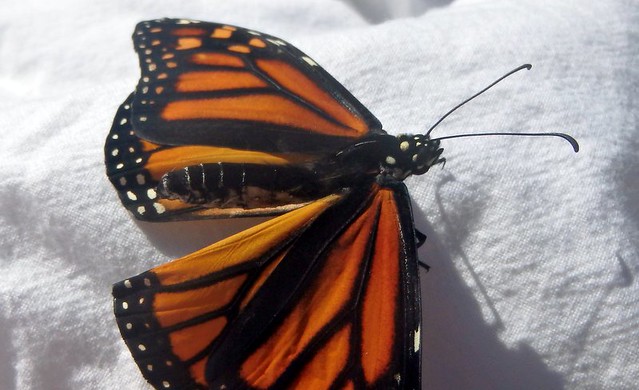 Because of those two things, I thought it might be OE, a parasite that lives inside monarchs and related butterflies. We collected a sample of her scales and used our microscope but couldn’t find anything. But since it’s a very cheap model and we weren’t sure it was powerful enough to see tiny OE spores, we sent it for testing.

Edith at Shady Oak Butterfly Farm didn’t find even one OE spore, proving that tests are needed to determine OE, not just observation. Here’s what she told me via email: “The problem is that the spotlight is so bright on OE that other diseases are openly doing their nasty work and no one blames them. They treat for OE and sometimes OE treatments won’t take care of the other diseases. … It reminds me of magicians imitating pick pockets. We are so busy looking at their right hands with the flashy tricks that we don’t see their left hands picking the subject’s pockets, right there in plain view.”

Another parasite, or a virus or disease, could have been the culprit. A younger butterfly – which had been raised in the same container as this one – was fine, though, which makes me think it wasn’t a contagious problem. Still, it’s a good reminder for next year that we will need to thoroughly clean the caterpillars’ cages daily (which we did this year anyway) and bleach them between generations (likewise) to try to prevent issues. 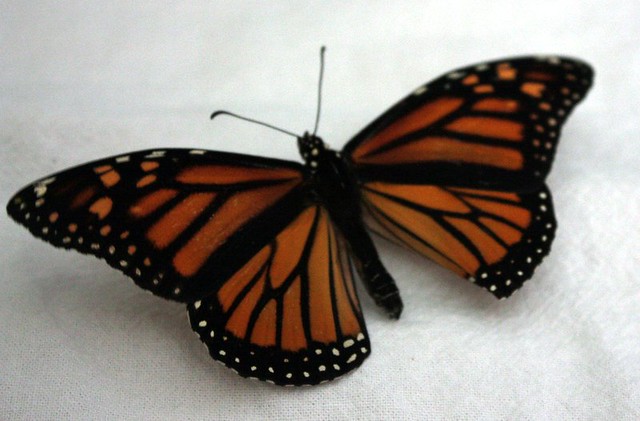