You’d think with all the time I spent observing and cleaning up after caterpillars, I wouldn’t have had time for the outside garden, but I did. In fact, I’m having a hard time coming with my favorite success stories because there are so many to choose from. These more than make up for the few garden disappointments.

Milkweed‘s success goes without saying since I’ve so thoroughly documented our monarchs, though this photo is a reminder that butterflies aren’t its only visitors. We’ll keep the common milkweed (though we may thin out the number of plants) and butterflyweed, and this year we’ll try adding swamp milkweed and possibly others to extend the monarch season. 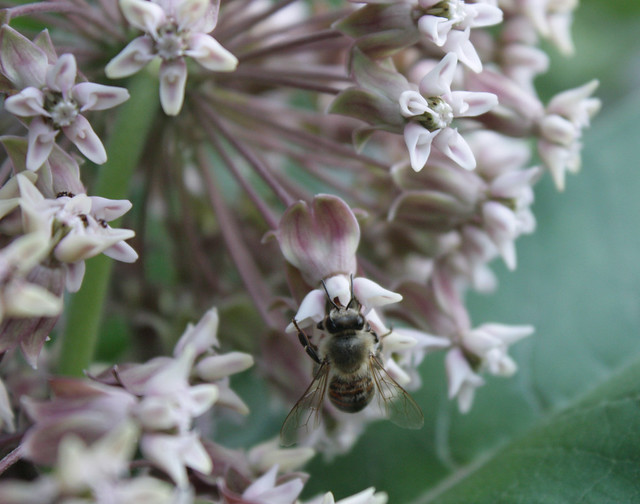 Iris was on the bigger and better list in 2014. That photo comparing 2013 to 2014 looks so quaint now because these flowers are multiplying exponentially. We divided the biggest clump and will need to be even more proactive at the end of 2016. 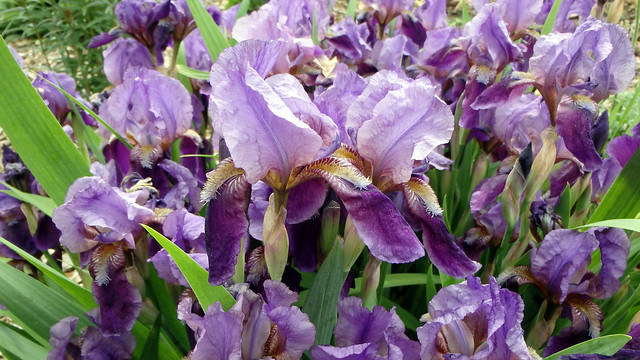 Trilliums: This is the first time we’ve successfully grown trilliums – one of my all-time favorite wildflowers back to fourth grade science class – after a couple attempts! First up were trillium sessile, which we added in 2014 after they bloomed. 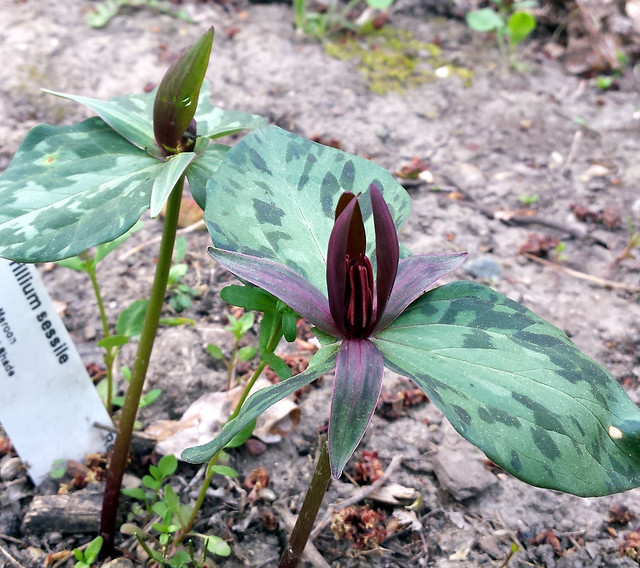 Then came many large-flowered trilliums that were transplanted from my parents’ yard. 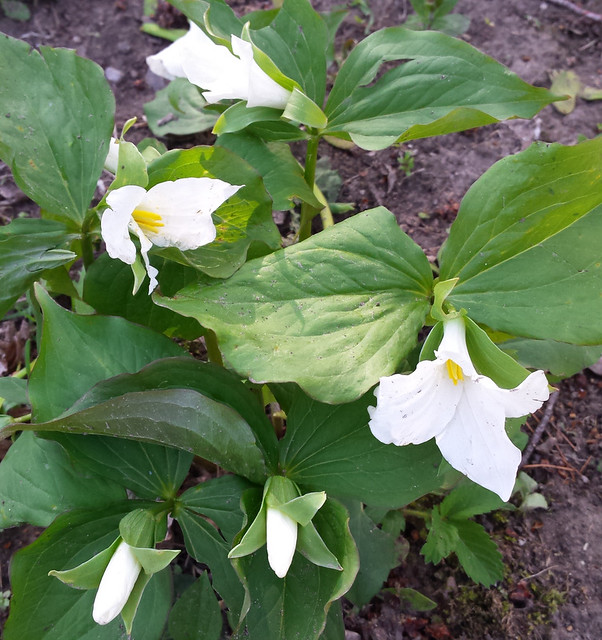 Wild geraniums are another childhood favorite transplanted from my parents’ yard, growing for the first time in ours. They were also used as a bed for some cute native bees. 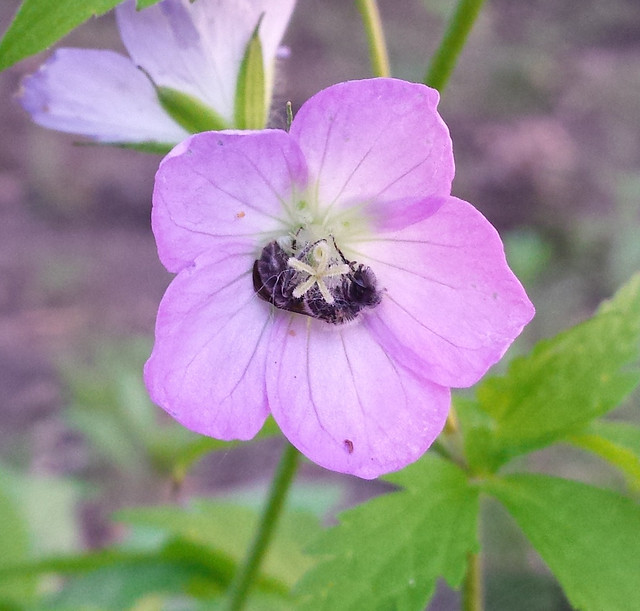 I didn’t see this jack-in-the-pulpit until it popped out of a patch of violets – a fun surprise. It’s the first one to bloom after a couple years of planting seeds. There were also lots of non-blooming jacks, so I expect more next year. 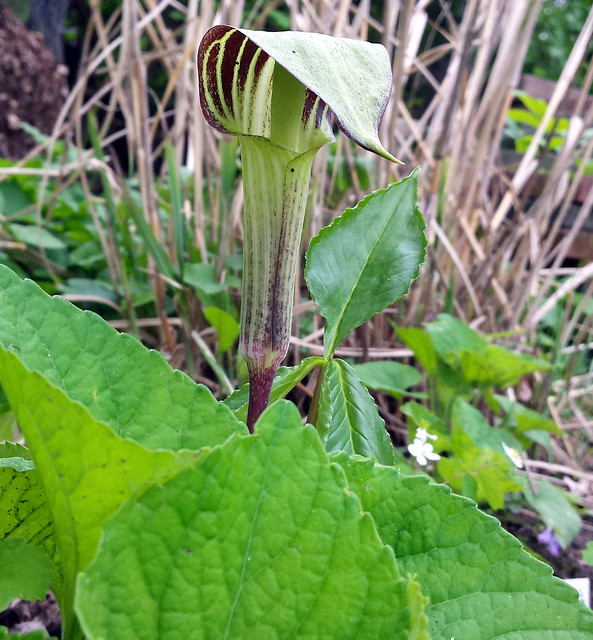 Cinquefoil was blooming by April 27, though the tag says it should happen in mid- to late summer. This is one plant; a second, planted right next to it at the same time, is hidden somewhere under these leaves. Not sure why this one did so much better than its sibling. 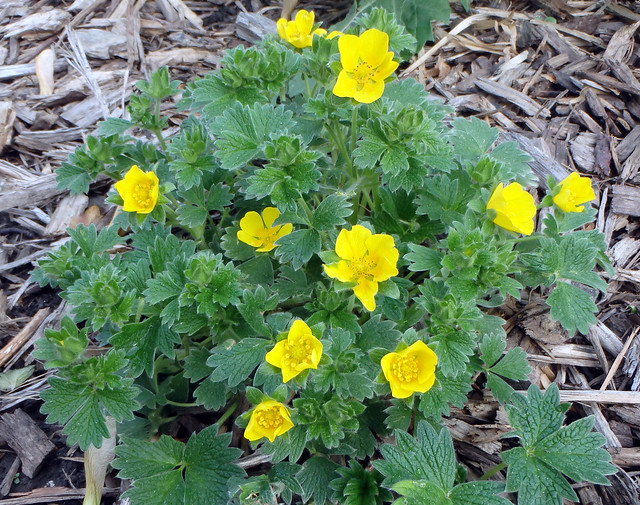 Snowdrop anemone was on the bigger and better list last year, and this year it got even bigger. It’s threatening to take over a large chunk of the garden, so during autumn cleanup we tried moving it to a new spot under a pine tree. I am afraid that this might be one we need to remove completely, if it keeps up its aggressive nature. 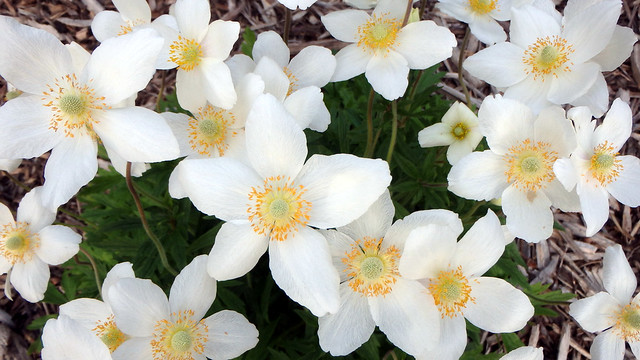 Lamb’s ear was on the success list last year so I hesitate to include it again, but in 2015 it flowered for the first time. 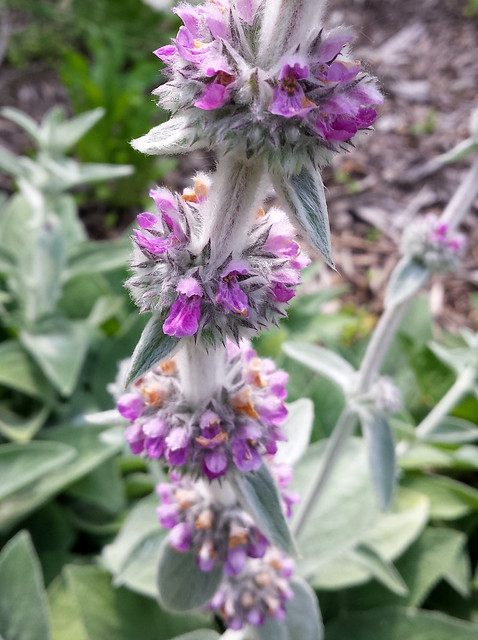 Stiff goldenrod: Who buys goldenrod, when it’s a “weed” that grows everywhere? Me, that’s who. We already had a volunteer Canada goldenrod, and I bought a stiff goldenrod to diversify. Boy, did bees like this newcomer. Maybe it’s because by the time it bloomed, most of the other flowers (including the Canada version) were done, but I couldn’t keep track of all of the honeybees, bumblebees, tiny native bees, wasps, beetles, and flies that converged on this one. They did not sit still for me, so this is the best photo I could get of the variety of insects. 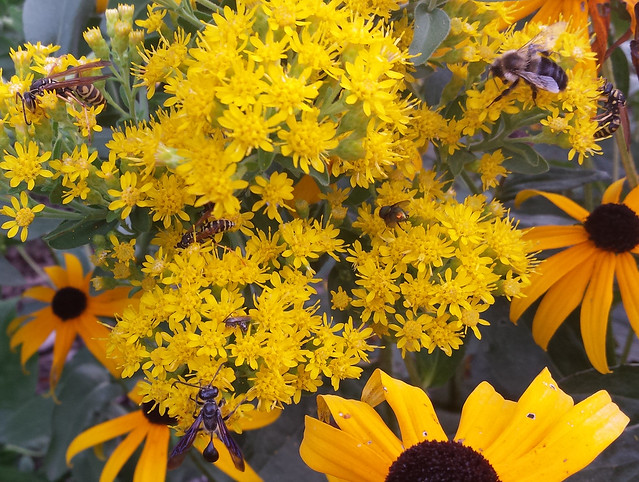 Culver’s root really shined this year. It was fun to watch insects climb up its spikes. 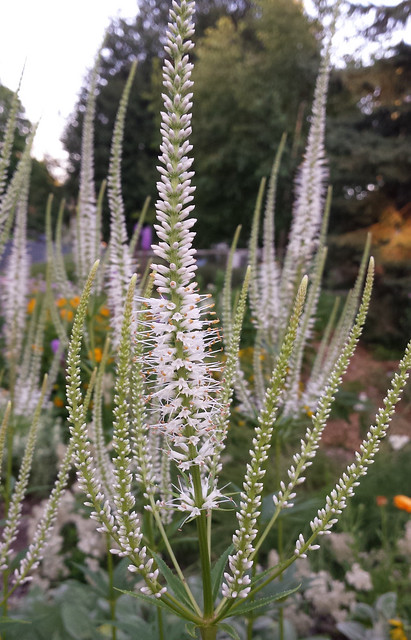 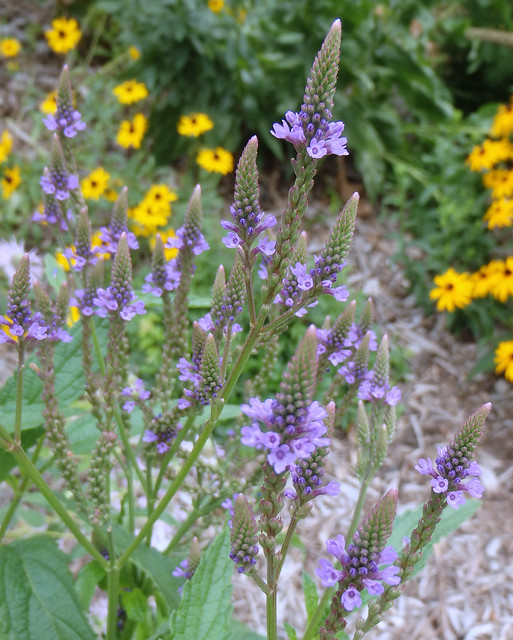 Gray-headed coneflower spread like crazy in 2015. It’s a native so I’m trying to be open-minded, but we’ll have to keep a close eye on this one in 2016 so it doesn’t crowd out its neighbors more than it already has. 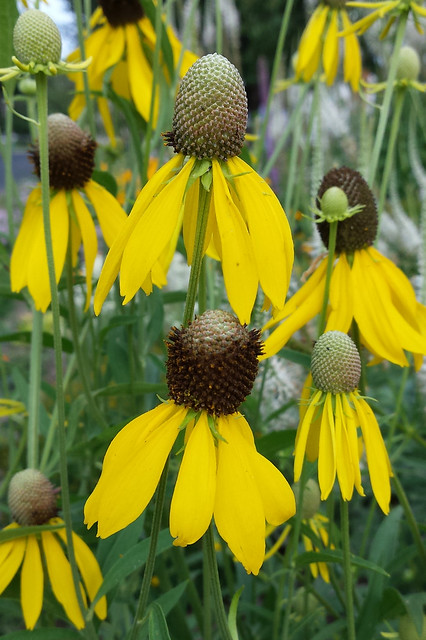 Plains coreopsis is another to watch closely. It was from a “wildflower” mix from a couple years ago, and it’s been self-seeding ever since. 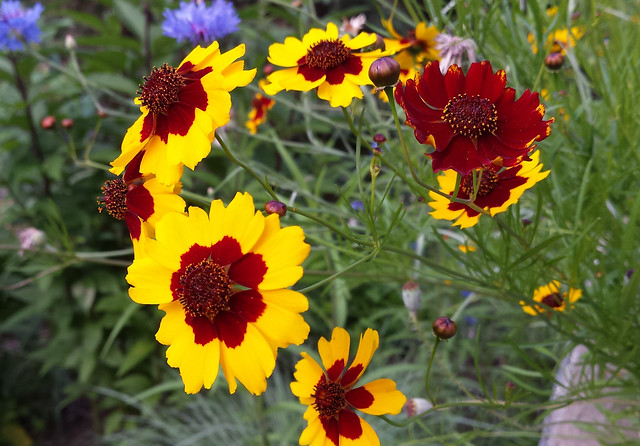 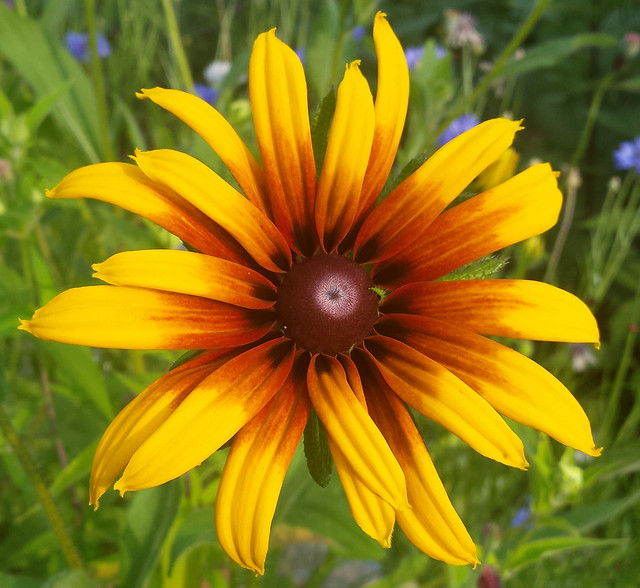 Cup plant was quite the show-stopper. We bought it in 2014 so it didn’t have a chance to do much until 2015. It grew taller than my reach – taller even than the 4-to-8 feet advertised on its plant marker. Apparently I was intrigued by the “cup” aspect because I took several photos like this: 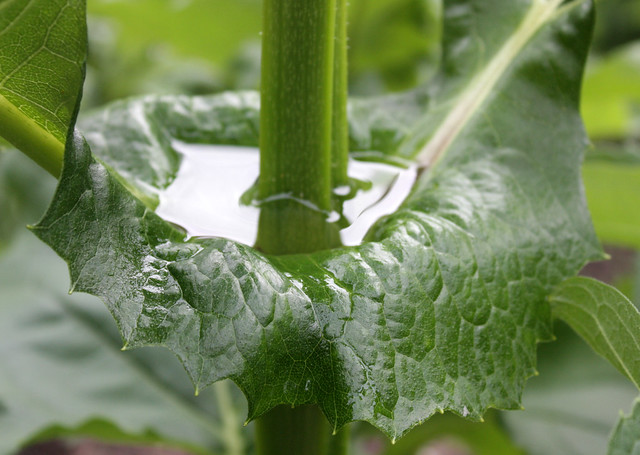 It attracted bees, butterflies, and even birds – I often saw goldfinches and one day spotted a downy woodpecker! 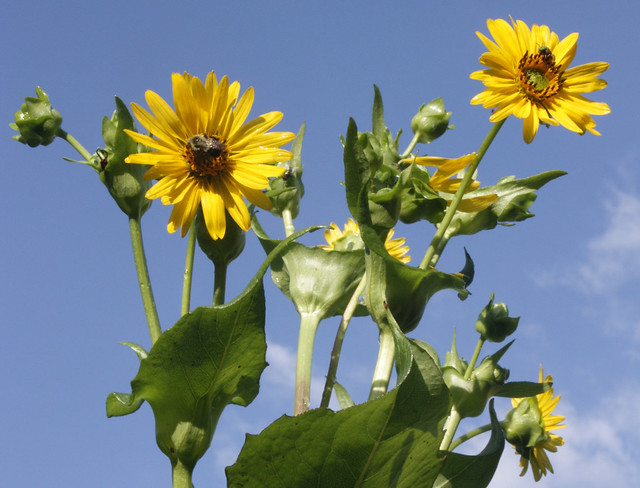