As a master naturalist, I am required to complete 40 hours of natural resources volunteer service per year.

As someone who loves nature, this is not a chore. For example, I’ve wanted to take part in Three Rivers Park District’s seed collection events for the last couple years, but this was the first year I made time for it – and I’m glad I did.

Activities such as wildflower planting and invasive species removal – stewardship – are where my interests most naturally lie. I’ve been doing citizen science, unofficially, in my own front yard (observations such as the 2015 monarch adventure), so I may join official projects in the future (ladybug project, bird counts, etc.).

Could this blog and my corresponding Instagram account count as education / interpretation? Perhaps. I spend way more than 40 hours per year on each, with taking photos, editing and posting photos, writing and editing notes, and most of all, research. But for now, that is a fun hobby.

My husband and I participated in a City of Roseville service project in July, then I kind of forgot about this until the fall and had to cram in a bunch of events. (It’s not a surprise; I am an experienced procrastinator.) So my autumn was extremely busy packing in as many events as I could to reach the quota.

“Don’t count your naturalist service hours before they’ve hatched.” Isn’t that how the saying goes? Yes, I waited too long to get started; but FOUR volunteer events I had planned to attend were cancelled due to weather – two for rain, one for extreme heat, and one for a winter storm. A fifth was supposed to last two hours but so many volunteers showed up that it took only one. That’s a lesson to me to get the hours in early next year because something may come up to prevent my planned events from happening.

Here are the descriptions I submitted when reporting my service hours:

7/16 City of Roseville, 1.5 hours: Email solicitation: We’ll be doing shoreline planting along Bennett Lake in Central Park. Holes will mostly be predrilled [they weren’t, and it was quite difficult to dig through the thick roots on the shoreline] and many hands are needed to install hundreds of plant plugs in the designated area. [My husband participated, too.] 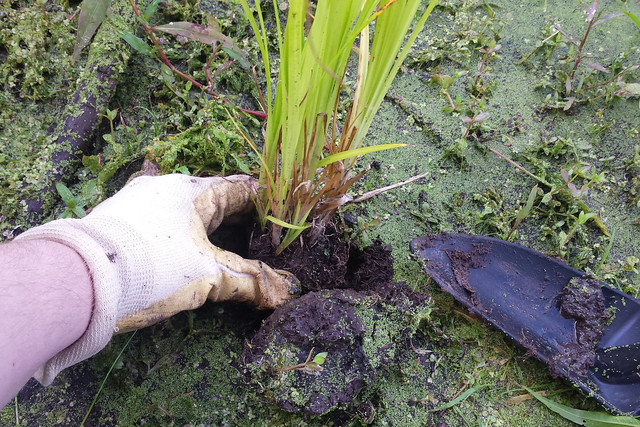 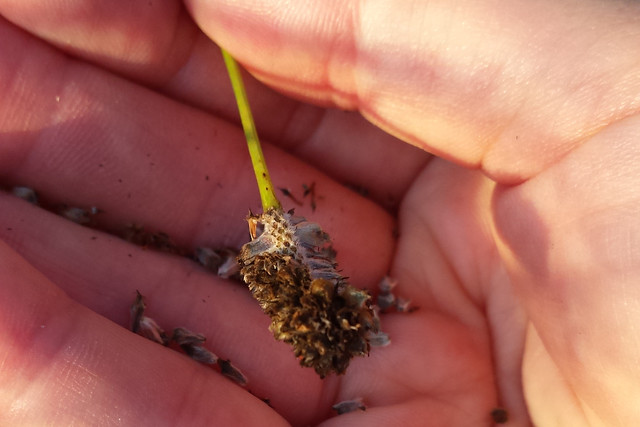 9/3 Crow-Hassan Park Reserve for Three Rivers Park District, 3 hours: Collected purple prairie clover and white prairie clover seeds and now can easily tell the difference between the two. [Unbeknownst to me, an Instagram friend was also collecting seeds at this event!] 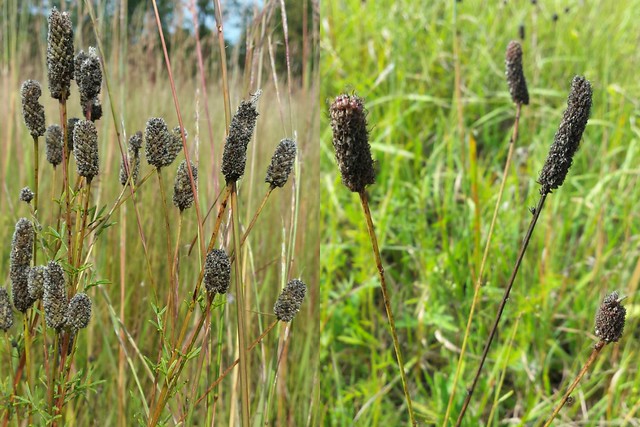 9/8 Lebanon Hills Regional Park in Eagan, 1.75 hours: Collected wildflower seed: mostly bush clover, plus some monarda and five spiders. Wrapped sweet everlasting, flowering spurge, and whorled milkweed pods in knee-high nylons to catch the seeds when they ripen (someone else will collect them in a week or so). Mosquitoes were awful. 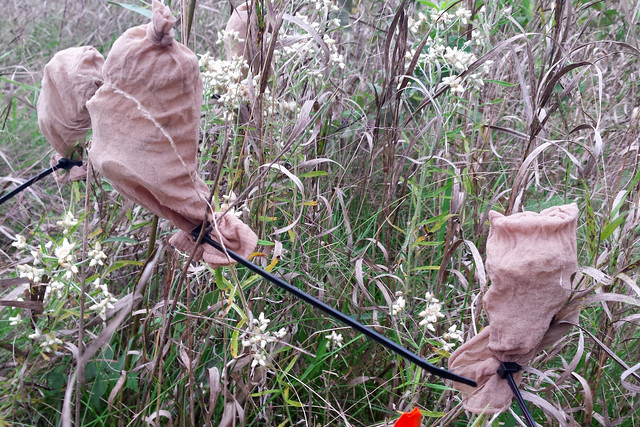 9/13 Coldwater Spring at Minnesota National River & Recreation Area, 1 hour: Dug up buckthorn shoots from an area that has been undergoing removal and treatment for 4 years. It would have been longer than 1 hour, but the crew leader took us “newbies” on a trip to the spring, with a wildflower and grass search (and nature jokes) along the way. 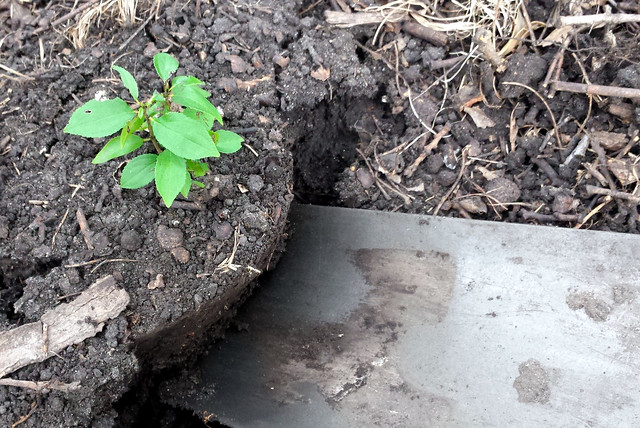 9/14 Eastside Heritage Park for City of St. Paul, 1.5 hours: Collected Canada wild rye (other volunteers collected side-oats grama) for the City of St. Paul’s Seed Squad. I brought a coworker along, too! Simply beautiful autumn evening in this small strip of prairie and there were hundreds of grasshoppers and native ladybugs and several orb weavers. I love collecting seeds. 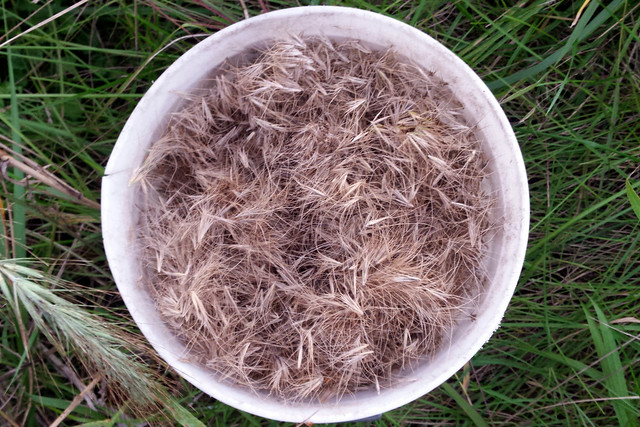 9/16 Ney Nature Center in Henderson, 3 hours: Monarch tagging event: Arrived at sunrise to observe monarchs in the trees, but we only found one, and it was out of reach and flew away. (The director speculated that yesterday’s storms kept new monarchs from moving into the area.) Later we walked through the prairie and again found one, but it too flew away. After a break, I ventured out again on my own, and with the sun now shining, I found several active monarchs and my first-ever viceroys! I caught five monarchs but tagged three because two escaped. (My technique got better as the day progressed.) 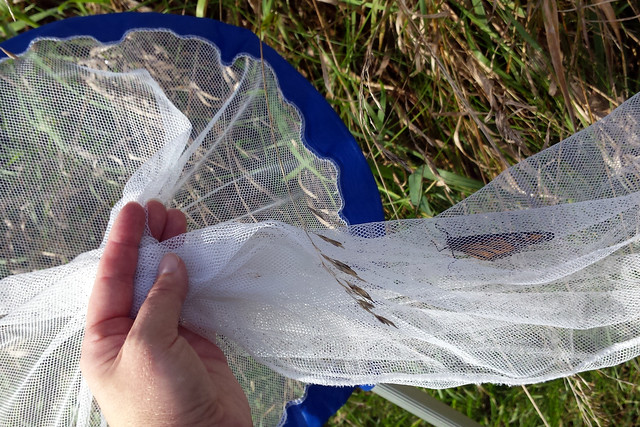 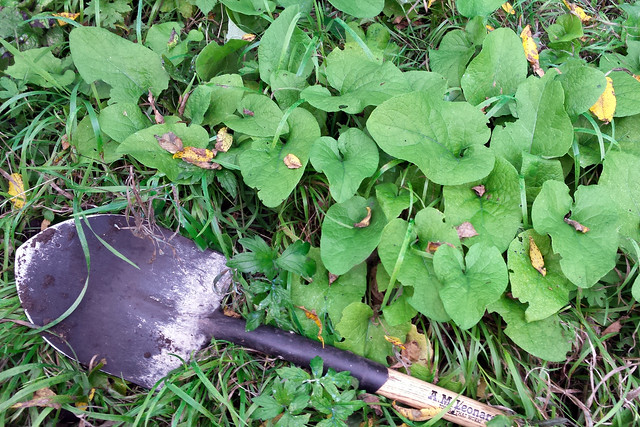 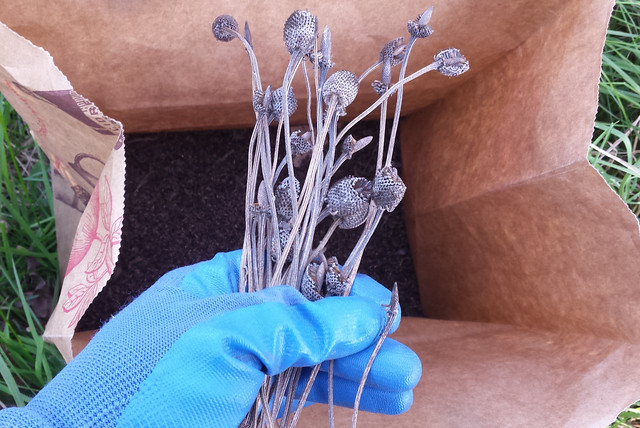 10/1 Sand Creek in Jordan for Great River Greening, 3.5 hours: Dug holes in non-native canary grass to help plant 500 trees and shrubs to restore the riparian zone in a former corn and hay field. A photo of me was used later in the week for the thank-you message to volunteers! 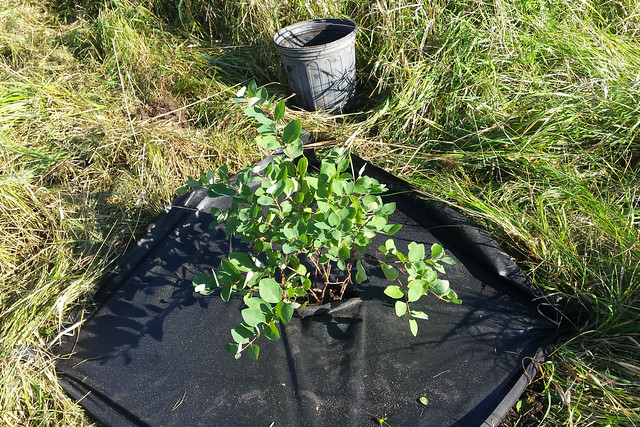 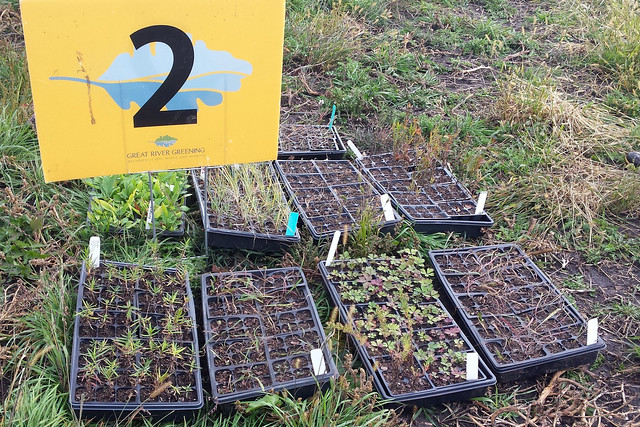 10/15 Murphy-Hanrehan Park Reserve for Three Rivers Park District, 3 hours: Collected nearly half a grocery bag of anise hyssop seeds; our group ended up with three full bags combined. There was also a lot of gray-headed coneflower (one bag). The group also collected liatris, thimbleweed, ironweed, and white prairie clover but not purple prairie clover. Overcast day, but the woods at the prairie’s edge were very colorful. 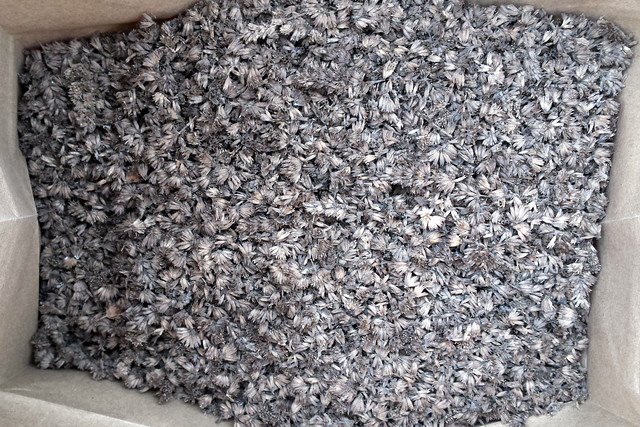 10/16 Eloise Butler Wildflower Garden, 1.5 hours: Buckthorn pull using weed wrenches. Amazing how big of an area can be cleared in just a couple of hours, when a group works together. 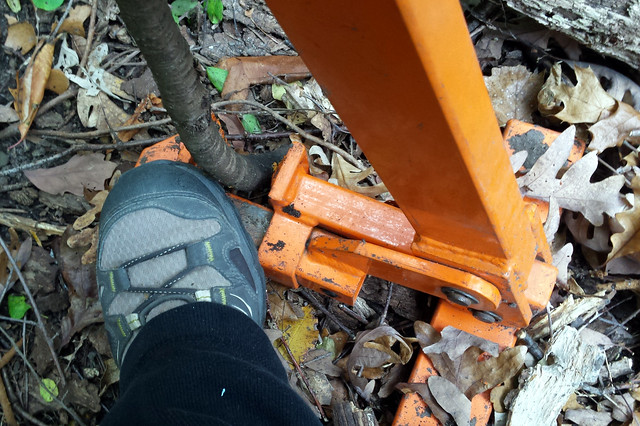 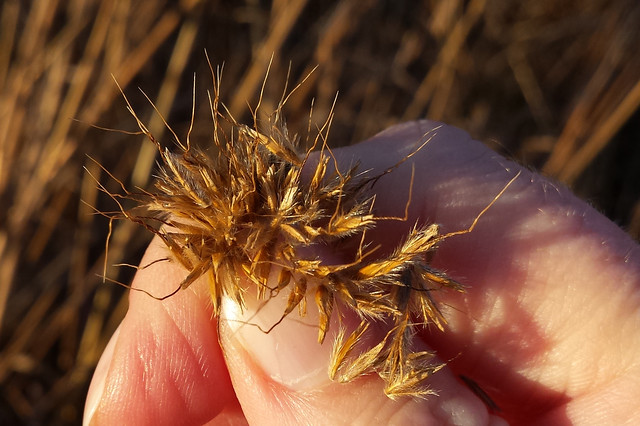 10/22 Crow-Hassan Park Reserve for Three Rivers Park District, 3 hours: Collected seeds from the relatively rare golden aster, a slow and painstaking process. Also collected liatris, a much quicker process that yielded almost an entire grocery bag of seed, and one bag of showy goldenrod stalks. Others in the group collected gray goldenrod and bergamot. Bright sunshine and almost hot by the end of the session. 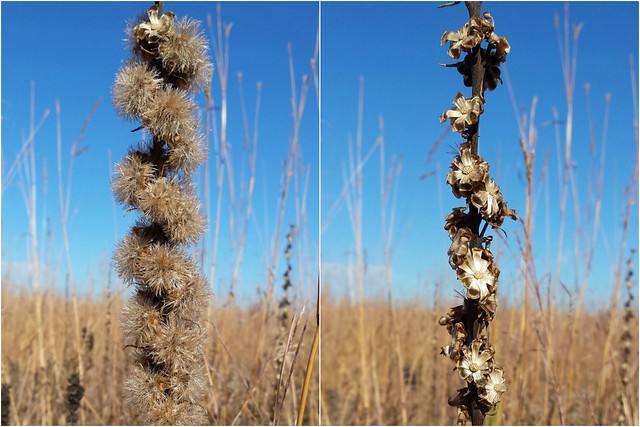 The master naturalist program also counts travel time as part of the volunteer time, so it was at this point that I surpassed the required 40 hours. But since I was at only 31 hours of actual service, I kept going.

10/29 Allemansrätt Wilderness Park in Lindström for Great River Greening, 2 hours: Planted baby bur oaks for a study of how trees from three different regions (Roseau, Twin Cities, Des Moines) grow in today’s Twin Cities climate, done by Great River Greening and the University of Minnesota. Each group planted 30 trees from each of the regions in a former hay field that is now a 125-acre city park named after the Swedish philosophy that citizens have a right of public access to wilderness and a duty to conserve and protect it. 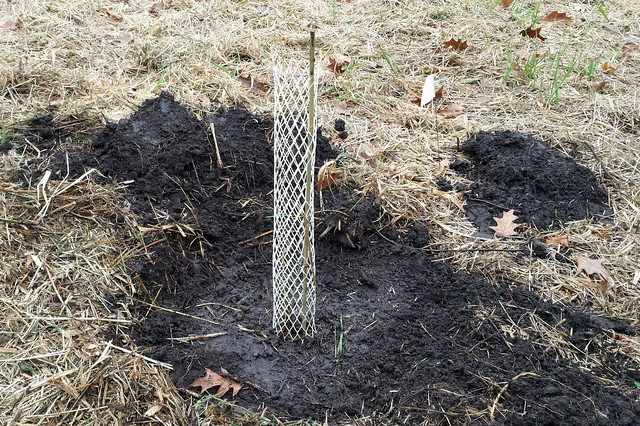 11/19 City of Roseville, 1 hour: Buckthorn treatment at Cottontail Park: dragged pre-cut brush to piles in the park in preparation to be shredded early next week. It was scheduled to be a two-hour event, but more than 20 people showed up and we finished in one hour. 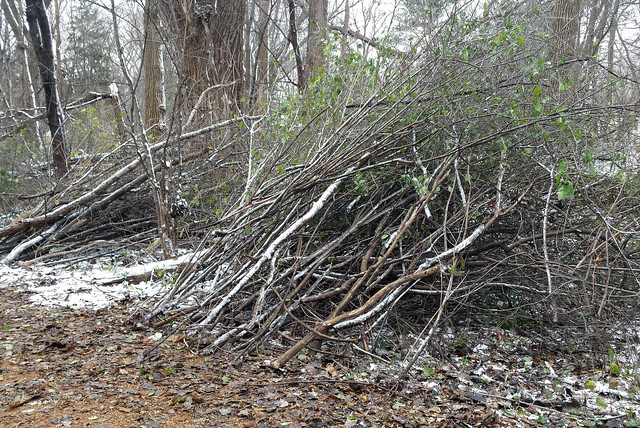 12/17 City of Roseville, 2 hours: Hauled pre-cut buckthorn and brush into piles for pickup. Six of us braved below-zero wind chill and several inches of fresh powder snow to drag limbs and trees from a frozen pond up a small hill. It went much faster after we figured out a “bucket brigade” system to pass the brush. 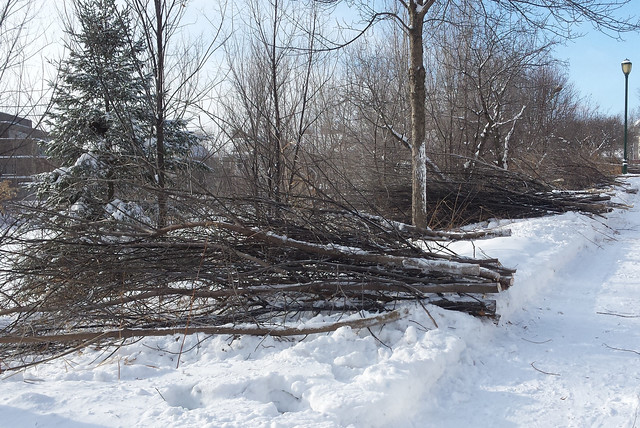 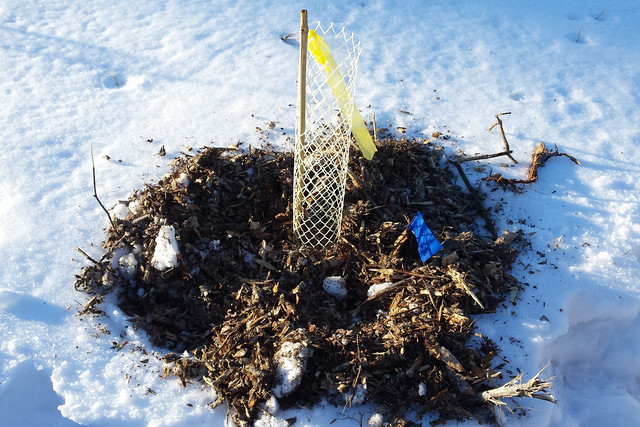 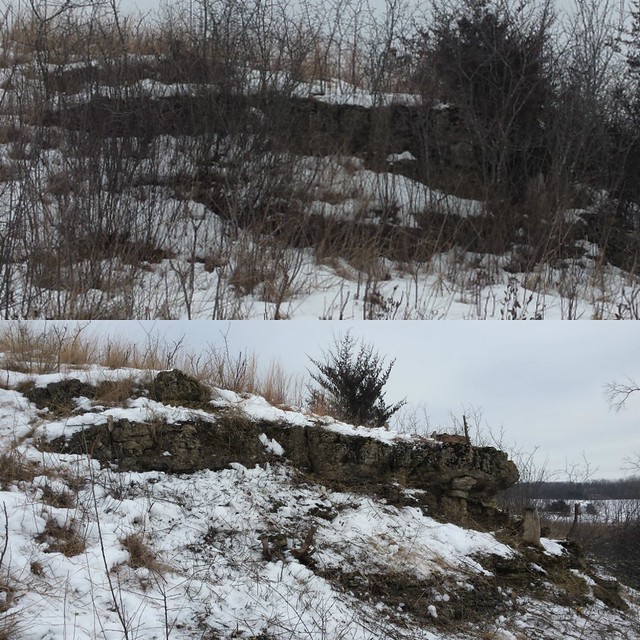 And that made 40 hours of service.

As fun as these events were, I need to spread them out more next year so I don’t get so exhausted trying to make it to every event left. I really appreciated the organizations that held events during the week; every weekend during September and October had multiple options on Saturday mornings, and I could only do one at a time, so that was frustrating. (How about Saturday afternoons? How about Sunday afternoons? How about weeknights?)

I absolutely love collecting seeds (as long as the weather cooperates). It’s so peaceful and relaxing and stress-relieving. Next year, when I will have presumably met my 40-hour requirement long before fall, I will almost certainly still participate in seed-collecting as often as I can.

I need to get started way earlier than I did this year. It felt like I was doing service events twice a week for months, and I still needed to scramble in late December to hit 40 hours. I learned my lesson and will get started right away in 2017, so buckthorn-clearing events in a snowstorm are an option and not a requirement!

Though I can honestly say it’s fun to volunteer, even in the winter.

More photos from my volunteer service