On August 15 I found something in our box elder tree that is definitely not a box elder bug. 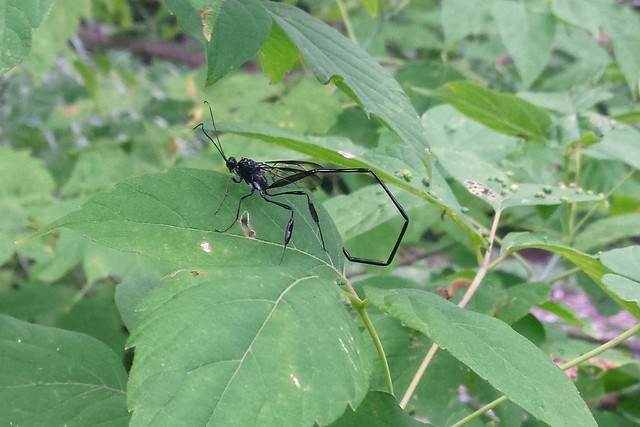 A quick Google image search (“mn fly with scorpion tail”) identified it as a wasp, American Pelecinid, that looks intimidating but doesn’t have a stinger. It uses its long abdomen to dig into the ground until it finds the grub of a June beetle, and there it lays an egg that will feed on the grub.

It would be nice if it would look for Japanese beetle grubs, too.

Two weeks later, at a seed collection event, one of these insects landed on another volunteer. No one else knew anything about it, and I was so excited to share what I know about this wasp, including that it’s harmless. However, I couldn’t remember its name, and so I looked it up on my Instagram feed.

In my excitement to share, I called it a PELICAN-id wasp. It wasn’t until about five minutes later that I realized it’s probably pronounced “pell-i-SIN-id” instead. (And yes, according to a Google search, that second version is true.) I was embarrassed the rest of the event, and I don’t think I’ll forget the name again.