In 2017 there was so much monarch activity going on in the front yard, I honestly couldn’t keep up with all the eggs, caterpillars, and butterflies. It was a very entertaining change compared to the previous year, when I found only one caterpillar!

The season started really early, with a monarch laying eggs on May 26. I watched at least eight or nine of them (it’s not always easy to find all of them at once to count them) grow up into full-sized caterpillars ready to pupate.

Most of this action happened on the common milkweed. After spotting six eggs on one butterfly weed, I only found caterpillars there once or twice.

For the first time, I saw caterpillars eating not just the leaves of milkweed plants, but the flowers or flower buds, too. This one was likely one of the eggs from the May generation:

(If you can’t use the embedded video above, watch a monarch caterpillar eating common milkweed buds on YouTube.) 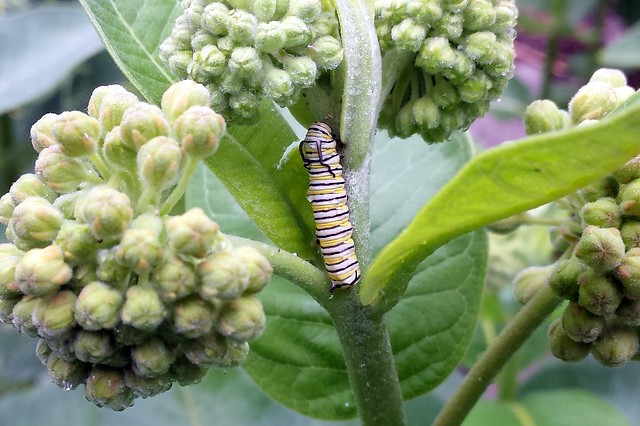 In previous years I had planted swamp milkweed seeds in the front yard but never saw them appear. In the backyard, I had tried a couple of other varieties such as whorled and the “hello yellow” butterfly weed cultivar, but they were either eaten or overtaken by weeds. Last year, I decided to get serious about trying other milkweed varieties, to not rely too heavily on common milkweed, which often fades too early for the later monarch generations. So in June I picked up a few new milkweeds at the Landscape Revival plant sale: poke, prairie, and whorled (along with a couple non-milkweeds). 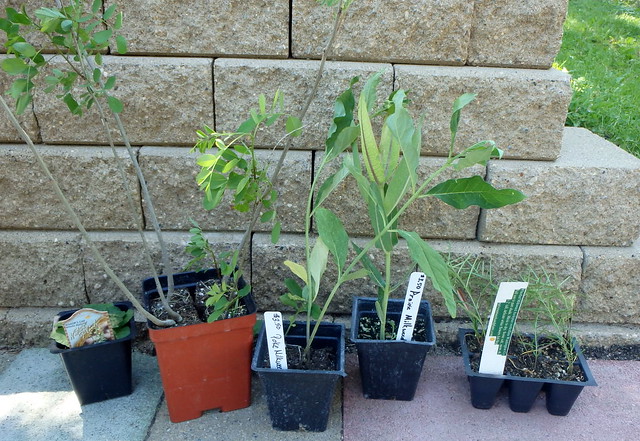 Some other time that I’ve already forgotten, I also picked up Sullivant’s and showy. I decided to fence in these new plants (the chicken-wire is not easily seen in this photo, though)… 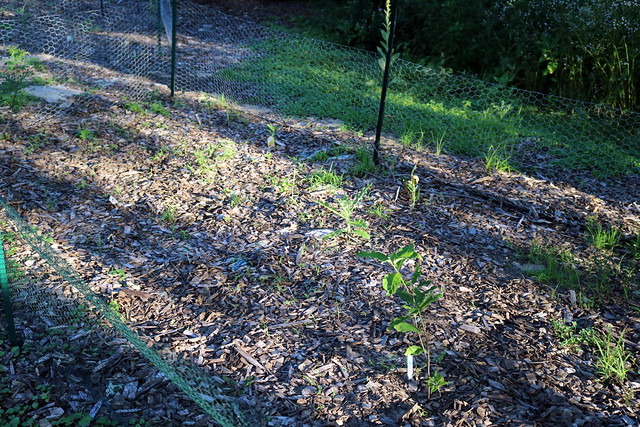 … and that seemed to make a difference — not only did all of these survive, so did the whorled from years past that I thought was lost, as well as a couple of others that were not planted this year and so I’m not sure what they were. One was a butterfly weed that may have been the old hello yellow or may have been from seed that wandered over from the front yard. The others, I don’t remember at this point; I hope they come back and flower next year so I can find out what they are. But I know that they were milkweeds because all of these, old and new, planted and surprise, ended up with monarch eggs and then caterpillars!

One afternoon while I was giving a garden tour for my Butterfly Buddy, a monarch flew into the backyard to lay eggs. The most amusing part of her visit: she couldn’t figure out how to get over the chicken wire fence protecting the plants, so she first flew all the way around the perimeter, then landed in the middle of the fence and squeezed through one of the small wire openings! I’m really glad there was another witness for that because I’m not sure my husband believed me when I told him later (and I don’t blame him).

When I checked the plants later, I found out that not only had she picked this small showy milkweed, she chose a leaf that already had a hatchling! And on the same plant was a row of four lacewing eggs. When I went back to take a picture with a better camera, the caterpillar had already eaten the egg! That’s one way nature deals with competition, I guess.

In all, I counted seven kinds of milkweed in the backyard, and this monarch laid an egg on six of them! I don’t know whether she also visited the common milkweed in the front yard, but this was a good validation for my plan to plant more species for later generations. 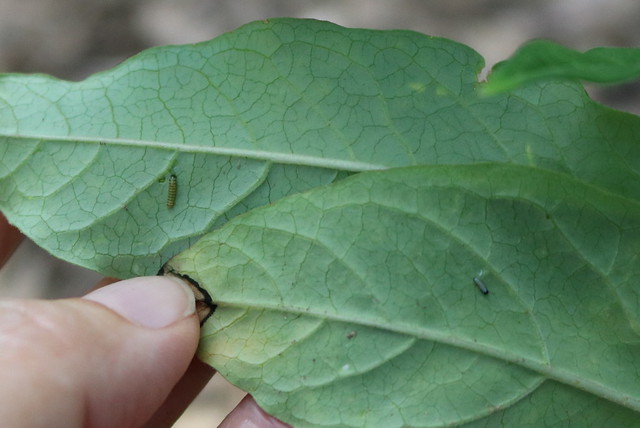 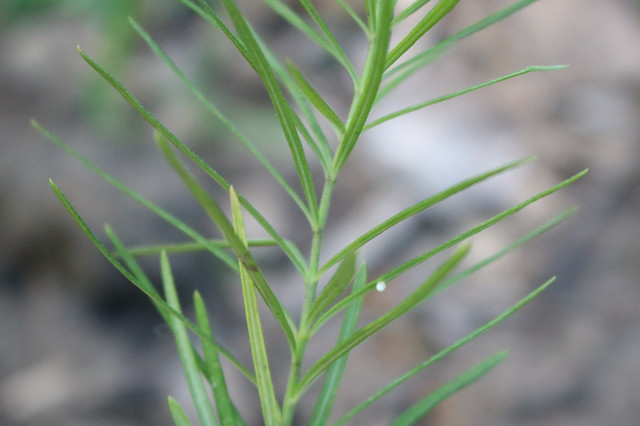 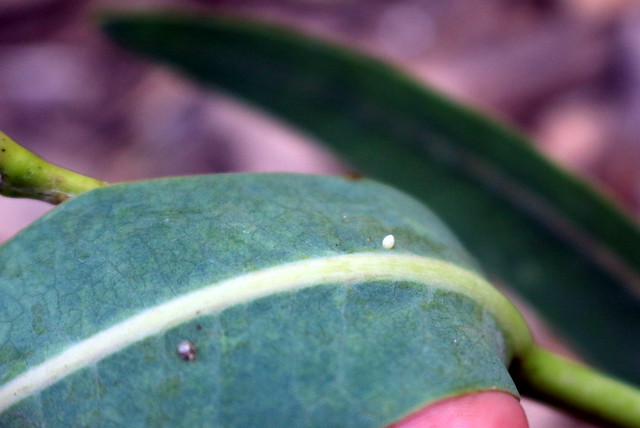 Sullivant’s milkweed with evidence of a caterpillar feeding: 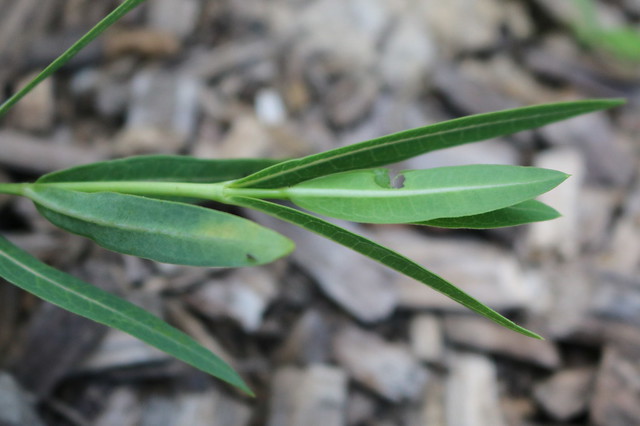 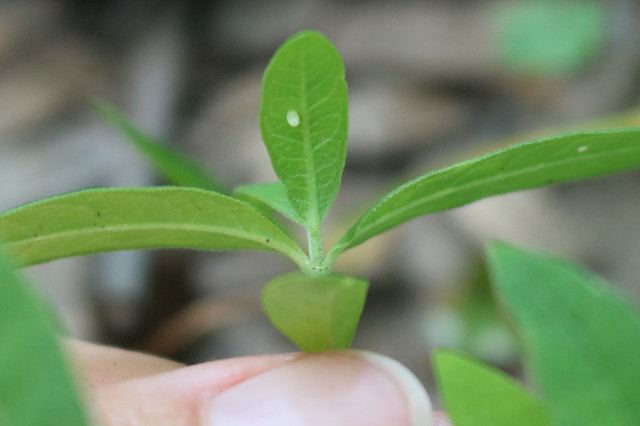 Are whorled milkweed leaves really big enough to support caterpillars? What happens when the caterpillars grow past, say, the third instar? 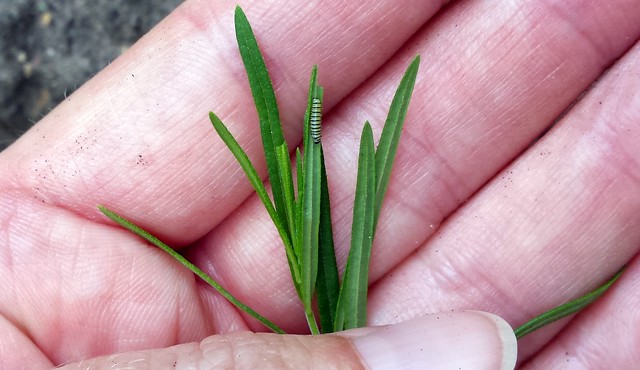 Nearly all of these plants were very small, not just the whorled milkweed (which is always small, even when fully grown). The exception was the poke milkweed, which was definitely not a first-year plant when I bought it. None were big enough, or perhaps it was that they weren’t established enough, to flower. I saw many caterpillars over the next couple weeks, but as I had worried, I saw none past the third instar. I’m not sure why: not enough food, too much competition, predators, moved to another area (though the front yard is quite far away for a little caterpillar), or something else. 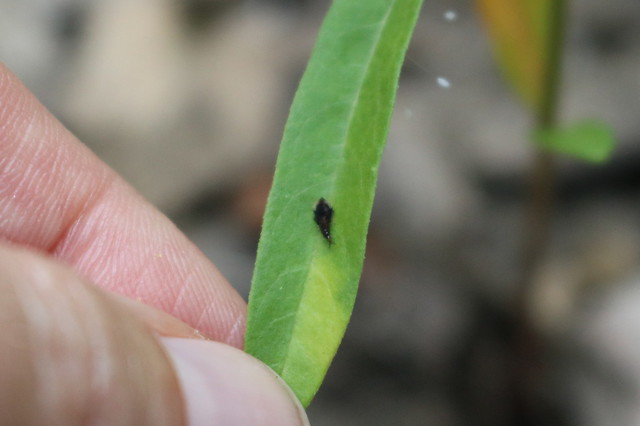 Following that generation, the next time I saw new eggs on the backyard milkweed, I collected eight of them to raise indoors.

After this amazing season of monarchs indoors and out, I’m hoping for another good local population in 2018 and will plan to order tags for the migration generation. 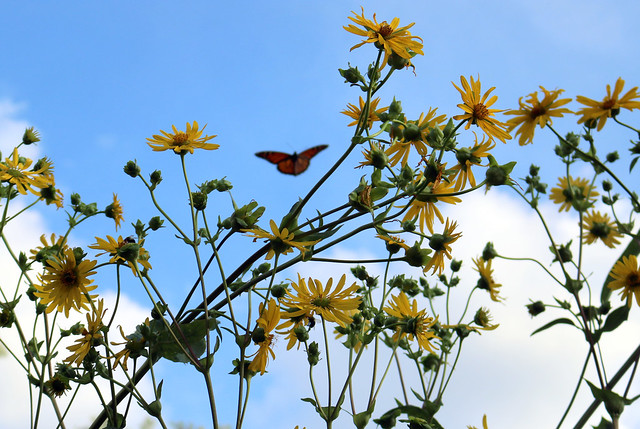