The stiff goldenrod began blooming this week, and that’s attracting many bumblebees and honeybees and at least three locust borers, which are yellow-and-black longhorned beetles. And then I spotted this: 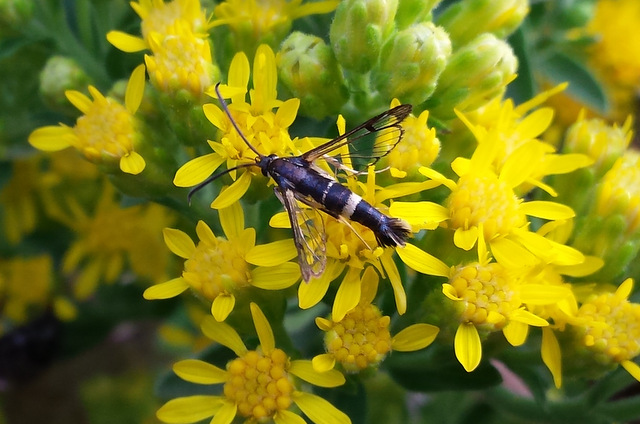 It looked like a tiny hummingbird moth with its transparent wings and tail shaped like a lobster’s. In fact, when I searched for “clear wings lobster tail,” all the results were about hummingbird moths – but this is just a fraction of the size, and it doesn’t flit like a hummingbird but instead it acts like a bee or fly. It swishes its “tail” up and down like a mermaid.

This is the third borer I’ve seen in the last two years. The others:

Perhaps the most famous borer these days is the destructive, invasive emerald ash borer beetle – fortunately, I haven’t seen one of these yet. And there are others that aren’t quite as destructive, though they do cause damage.